`Crime of passion’ | Durante, 9 others tagged  in Yvonette Plaza murder

The Special Investigation Task Group (SITG) Plaza has filed murder and several other cases against Brig. Gen. Jesus Durante III and nine others for the killing of Yvonnette Chua Plaza last year. 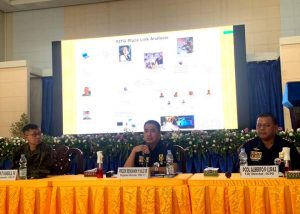 In a press conference held at the Bagani Hall of Police Region Office 11 on Wednesday, the investigating body identified Durante, recently relieved as 1001st Infantry Brigade commander, as the mastermind of the crime.

Lawyer Eudisan Gultiano, task group and Police Regional Office 11 spokesperson, said cases of murder, theft and obstruction of justice were against Durante, also the commander of the Presidential Security Group during the time of former President Rodrigo Duterte, and nine others in the slaying of Plaza last year in front of her rented house in Green Meadows Subdivision, Barangay Santo Niño, Tugbok District on December 29.

Licyayo, Plaza, and a soldier known only as “Master Sergeant” are sued for obstruction of justice, a violation under Presidential Decree 1829; while Plaza and Cachero are also facing a theft complaint.

The TIMES sought Durante’s comment on the result of the investigation through his social media account and mobile phone, but he did not reply.

National Bureau of Investigation Regional Director Arcelito Albao, whose agency helped in securing other pieces of evidence, said Durante and the victim had a relationship, as he tagged the killing as a “crime of passion.”

“There are witnesses to prove that there was really a relationship between Durante and the victim,” Albao added.

Brig Gen Benjamin Silo Jr., director of Police Regional Office 11, said that the victim had very sensitive information that she used to blackmail Durante which may have been the reason for the murder.

He added: “Based on the testimony of the witnesses, there were instances that Durante got jealous but we are looking into other factors that led to this senseless killing,”

Among the pieces of evidence were the message exchanges between Durante and the victim and the photographs of the military officer that were found in a gadget recovered from the house of the latter, Gultiano said.

The victim, last year, posted some pictures on social media showing some wounds on her face and tagged Durante as behind it. It was eventually removed, but the same pictures resurfaced after her death.

Immediately after the killing, Durante denied allegations that he was behind the crime, saying that he and the victims were friends and he was sad that she was murdered.

Gultiano said the break in the case took place when a person provided information that it was Sialsa who pulled the trigger, while Cachero was the driver of the motorcycle used in the crime.

The two suspects, during the course of investigation, confessed and dragged Durante as the one who ordered them to kill Plaza. Also making his extra judicial confession was Japitan who was tasked to dismantle the motorcycle used in the crime as well as change its color.

Investigators were also able to recover the belongings of the victims from the suspects including her mobile phone, handbag, identification card and credit card.

Brig. Gen. Allan Hambala, deputy commander of 10th Infantry Division, said soldiers implicated in the crime were relieved from their posts and were placed under the custody of the Philippine Army, while Durante and Licyayo were both ordered to report to the Army’s national headquarters. The effectivity of the order was January 19.

“The army is a professional organization, this is not service related, We will never tolerate nor condone our personnel regardless of his rank and designation if he commits any crimes,” Hambala said.

“With the information, we are confident that we have a tight case against the suspects,”, Gultiano said.

Silo said the P1 million reward money will eventually given to three individuals who provided key pieces of information that led to the resolution of the crime.