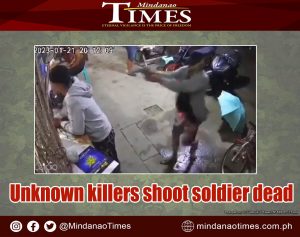 UNIDENTIFIED men shot dead a soldier as he was about to buy medicine in front of a pharmacy in Purok 4, Barangay Bankerohan Sur, Montevista, Davao de Oro Saturday evening.

Based on the report, the victim was Sgt. Rene Herana Asio, 32, married, and a transient resident of Purok 7, San Jose (Pob.), Montevista.

The report said that someone called the police station to report about the shooting incident which saw the victim lying in front of Farmacia Dayne.

Investigators found out that the victim was about to buy medicines when someone shot him several times as he was even hit on the head. The killer immediately rode on a motorcycle which was driven by another person.

Witnesses brought the victim to the Davao de Oro Provincial Hospital-Montevista but the attending physician declared him dead.

Investigators have yet to identify the killers as well as the motive of the crime.