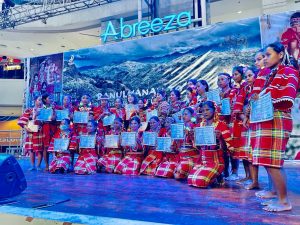 Panuluanan to Ata, an interactive exhibit showcasing the School of Living Traditions of the Ata Paquibato tribe, was launched last November 28, 2022, at the Atrium of the Ayala Abreeza Mall of Davao.  Panuluanan, Ata for “place of learning,” was a long time desire of the Ata elders of the community with the objective of passing on their culture and practices to their youth.  It has always been a dream of the Ata elders and leaders to build a cultural village where the Ata tribe can preserve their very own indigenous culture and at the same time strengthen their ties in the community.

It is also their goal to develop the Panuluanan to become a source of the much needed livelihood especially for the women.

During the special one day event, Ata handicrafts like woven mats and baskets and featuring Ata handwoven fabrics done by Ata women went on display for sale.  The Ata weavers of varying ages had their training in 30 days and were happy to receive their certificates during the event.  It will surely provide them with the much needed income from this livelihood skill they’ve acquired.

Ambassador Mylene Garcia-Albano in her speech revealed to the audience that she acquired understanding and appreciation of the culture and traditions of the Ata community of the Paquibato District when she was still Congresswoman of the Second District of Davao City.  “Having been immersed in their rich heritage, I have always placed the social protection and welfare of the indigenous Ata as top priority in my development agenda aligned with the vision of conserving and promoting cultural diversity in the region…..Several infrastructure projects in the Ata territory were initiated during my term of office as well as the projects that contributed to their improved access to health services and opportunities  of Ata young people for quality education….The Ata School of Living Traditions is one of the sustainable mechanisms for the revitalization of Indigenous Knowledge, Skills and Practices (IKSP) as well as instilling pride of place among the members of the Ata communities.”

On the other hand, Congressman Vincent Garcia assured the stakeholders of the Ata-SLT Program and the members of the Ata Indigenous Cultural Communities of Paquibato for the continuing support in the areas of “providing quality education, cultural infrastructure enhancement, measured and timely social protection, and a comprehensive community welfare.”

My great appreciation to our Davao officials in their admirable endeavor in helping the Indigenous Peoples’ effort in the preservation, conservation, and enrichment of their distinct culture and rich heritage.  Mabuhay.