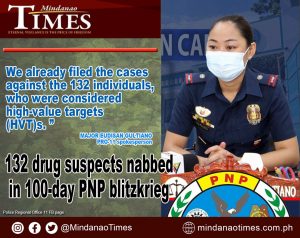 In an interview, Maj. Eudisan Gultiano, PRO XI spokesperson, said they already filed the cases against the 132 individuals, who were considered high-value targets (HVT)s.

According to PNP chief Gen. Rodolfo Azurin, different PNP drug operating units arrested 13,391 drug personalities, including 1,531 high-value individuals (HVIs) who were individually charged with violation of Republic Act 9165 or the Comprehensive Dangerous Drugs Act of 2002 from July 1 to Oct. 8, 2022.

Moreover, Azurin assured the public that the PNP will remain at the forefront of the national strategy against the country’s drug problem. But this time, they will use a holistic approach to address the menace in full support of the Philippine Drug Enforcement Agency.