Service disruptions on Nov. 26 and 27 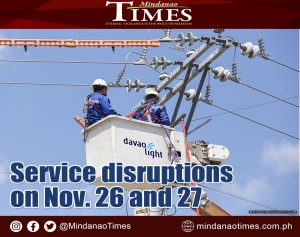 THE DAVAO Light and Power Co., Inc. will conduct three power interruptions on November 26 and 27, Saturday and Sunday, affecting customers in different parts of Davao City.

The first power interruption will be for 30 minutes anytime between 12:00 a.m. to 1:00 a.m. on November 26, Saturday. This service disruption will be necessary to conduct maintenance works in Matina Substation.

These service disruptions will be necessary to conduct line stringing and maintenance works near PLDT-Bangkal.

Also affected are customers from corner Gempesaw St. and Ramon Magsaysay Ave. to Leon Garcia St., Sta. Ana Avenue to Lizada Street, Boulevard to Ecoland, including Bucana, and Monteverde to Villa Abrille and neighboring areas; as well as customers in San Pedro Square and nearby areas.

Davao Light apologizes for the inconvenience brought about by these scheduled power interruptions. But it will exert all efforts to restore electric service as scheduled or earlier. However, there may be instances where restoration may extend beyond the schedule due to unavoidable circumstances.

Safety is of paramount importance to the company and Davao Light reminds the public to always take extra precautions when passing by activity area/s where line repairs and maintenance are being done. Please heed and follow warning signs, especially in areas where personnel operate heavy equipment.