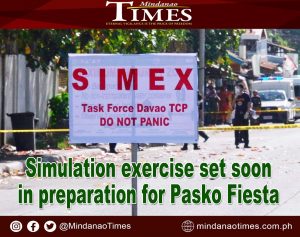 THE CITY security and safety cluster will conduct a security simulation exercise (SIMEX) in an unspecified location this month to prepare for the Pasko Fiesta.

The activity is conducted once every quarter and is in line with the propagation of the city’s “Culture of Security” campaign.

Task Force Davao Commander Lt. Col. Darren Comia, in an interview during the Madayaw Davao program aired over the Davao City Disaster Radio on Tuesday, said the location, time, and scenario for this quarter’s SIMEX will remain undisclosed even to security personnel who will be participating in the exercise.

He said the secrecy will further test the capacity of the city’s security and safety cluster to respond to terrorist attacks.

The TF Davao commander said applying what was learned from the previous SIMEXs, this month’s exercise will serve as a refresher course for the security forces on the Integrated Response on Terrorism Plan dubbed “Usahay II” as mandated by Executive Order No. 62 series of 2021.

Aside from preparing for unprecedented attacks, this quarter’s SIMEX will also serve as a means to prepare for the enforcement of the security template for this year’s Pasko Fiesta.

The TF commander urged citizens to remain calm and act as instructed by the authorities during the exercise. Delays to traffic movement will be kept to a minimum, Comia said, as he asked citizens for their patience.