This article is not meant to give any parenting advice but just to share my story. It is my hope that another parent could relate to what I would share, or at best,  I could inspire someone, which would really be great. I would not dare claim any expertise in parenting which I think is the most challenging but rewarding role in the world. I am just another mother who has been blessed with two sons and has been trying her best to raise them well. Just like so many mothers out there, I try to be a better version of a mother to my sons every single day and pray that I did right by them.

It took time before my husband, and I had our firstborn. After almost four years of trying, we sought medical help and were advised to change something in our lifestyle. Our doctor thought we were probably too preoccupied with our respective jobs that although we consciously wanted a baby, our subconscious minds had left us unable to procreate. My husband,  Albert, was then an associate at a top law firm in Makati while I worked as Chief Judicial Staff Officer at the Supreme Court’s Public Information Office. We were enjoying our work, but we also wanted to have a baby, so we followed our doctor’s advice and worked on changing our career paths.

After some time, I moved to an international organization, and Albert became a corporate lawyer. It turned out that our doctor was absolutely right. Two months after both of us shifted gears, I was pregnant with my eldest son. Barely a year after I gave birth to my eldest, I was pregnant with my youngest son. After more than four years of just having each other, we suddenly became a small family of four. Life suddenly became very busy and very interesting. 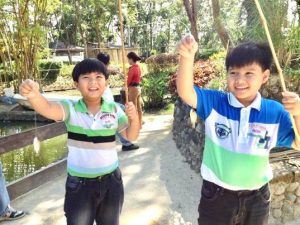 Toddler days were filled with playtime, early disciplining, pedia visits, hugs and kisses, story-telling, and the endless search for the perfect nanny to help out when Albert and I were at work. As we worked even harder for career progress, the demands of parenthood proved to be overwhelming at times. This was especially true when one of our boys got sick or their nanny wanted to return to her home province. Albert and I would end up so exhausted at night. All the running around when you have young kids that even attending parties became more tiring than enjoyable. Even more difficult was when we were hosting the parties ourselves. There were times when days passed like a blur, especially when so many things were happening in our respective careers. My Mom kept reminding me to enjoy that phase because this was when my sons’ lives revolved around Albert and me. They were dependent on us for everything, which could be exhausting. However, this was also the sweetest and purest of all stages of parenthood. This was when my sons would not sleep until their Mommy got home and when my kisses were so powerful that they could remove all the painful boo-boos away…Oh, my heart!!! 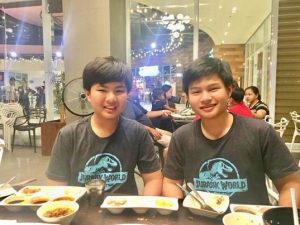 In a blink of an eye, my sons were in grade school. We had to step up in the parenting game for this. Tons of energy were required to bring our boys to school and their extra-curricular activities. There were so many interests to pursue and places to visit. They were starting to discover the world, and we wanted to encourage them by helping them engage in activities they were interested in, bringing them to places they wanted to see, and making them experience the world at its best. We had additional roles now of being a friend and a coach. We also had to make sure that we still played the role of good parents by keeping them on the right path with good discipline. This was the time when we realized that we have to be the very people our children could emulate because they were learning fast and well by example. I remember that quote that said, “children are great imitators so give them something great to imitate.” And so Albert and I tried very hard to be the best versions of ourselves for our sons.

Even before we could prepare ourselves for the next phase, our children were off to high school. Now, this is the phase when our boys started to really assert their independence. At one point, I unmistakably felt their 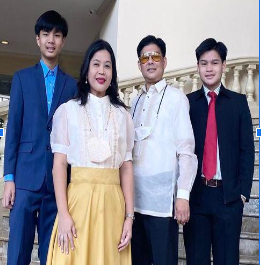 strong discomfort when I hugged and kissed them in front of their friends, that I made a mental note to fight the urge and not do so anymore. This was also when Albert and I tried to strike the right balance of making our boys feel they had some level of independence while appropriately monitoring their activities to ensure they would not veer away from the right path. Oh, temptations abound for young teenagers! The external environment and social media offer many alternative activities, so it’s important for us to ensure that our teens were doing the right activities.

Then, we also had to compete with their friends for their time. They play computer games with friends or go out with them on weekends when it used to be that all their free time was spent with us. Moderation was key at this phase. We knew our boys also needed to develop close bonds with people outside of the family and have strong friendships, so we allowed them to spend time with their good friends. We exerted utmost effort though they knew their boundaries and limitations. Our boys understood and never went out during those times when they were supposed to be with family, such as during important family occasions. Nevertheless, I would strongly feel a tug at my heartstrings whenever I would bring them to the mall for an afternoon out with friends. I guess moms can never have enough time with their sons, but we should not be selfish.

Then our eldest turned 18, a young adult entering college. He chose to go to the same university Albert and I attended. Meantime, our youngest son started senior high. Things have changed around the house. Albert and 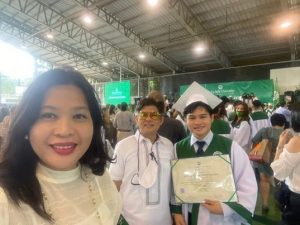 I get quick hugs from our sons, and then off they go about their respective schedules — from academic-related group meetings to gym sessions to doing their assignments to chilling out with their friends. I am amused that they actually have full schedules, but it warms my heart that they make themselves available whenever we need them. When I needed my eldest to drive for me, he would fix his schedule to be able to accommodate me. Meanwhile, my youngest spends considerable time helping me as my legal assistant. I tell Albert from time to time that by God’s grace, we managed to raise good sons, and it is my earnest prayer that they remain good and responsible people as they go through life. From time to time, I yearn for those days when their world revolved around us.  I am envious of those young moms I see at malls holding their young children by the hand. I am so familiar with that warm feeling of having your children so close that you can hug and kiss them anytime. However, my sons have grown up, and it’s a different ballgame for me now.  I have to learn to graciously let go of them, bit by bit letting loose of the parental reins.

Soon, I would have to prepare myself for the next phase when they would have their own careers and would be interested, if not constrained, to spend considerable time at work. Later on, they would also have their own families and become totally independent from us. I should learn to let them be, give them privacy and space but be present whenever needed or when asked. They have lives to live, and I am there to assist but not intervene. For now, I still have them at home, and Albert and I intend to make the most out of every minute by unconditionally loving them and further nurturing and guiding them to be good human beings.

Nowadays, I find myself telling Albert that when our sons start to raise their own families and live their own lives, I will focus all my attention on him. He first gives me a horrified look before breaking into a big smile. That only means we are off to another beautiful and exciting adventure; only him and me, just like how we started our family life. The thought of it also totally warms my heart.

*Atty. Chat G. Ocampo is a Davaoeña and, at one time, a columnist for Mindanao Times. She married Atty. Albert Ocampo who was her classmate at the UP College of Law in Diliman, Quezon City. Chat considers being a mother as her most important achievement.