Davao City was ranked the fourth most competitive in the highly-urbanized cities category by the Department of Trade and Industry (DTI) during the 10th Cities and Municipalities Competitiveness Summit last October 20, 2022.

The city maintained the fourth spot in the overall standing for most competitive HUCs, the same spot it had in 2021. This year Quezon City came in first, followed by Manila City, and Pasay City.

This is the eighth time the city was feted among the top competitive HUCs since 2015, said Davao City Investment and Promotion Center Officer-In-Charge April Marie Dayap in an interview with the City Information Office.

She said that as part of the offices that represented the city during the awarding, they were very delighted and honored that the city was recognized among the awardees under the highly urbanized category- considered the cream of the crop among all cities in the country. 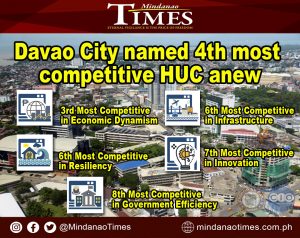 “The consistent inclusion of the city as one of CMCI’s top 5 awardees shows that we are growing. The award is a validation of the untiring efforts of the local government of Davao to improve and enhance its operations and systems for the benefit of our constituents. We take note that other cities are also doing their best to improve their services to their people,” Dayap said, adding that the recognition is dedicated to all Dabawenyos who continue to trust and cooperate with the local government.

Meanwhile, with the award, she added that the city government will continue to strive and to do better with its public service delivery.

“Our Mayor Sebastian Z. Duterte and our local officials, in partnership with the private sector, continue to come up with innovative approaches and solutions and take steps to improve our local government systems, delivery of services, and overall living and business conditions in the city, is the driving force behind the success of the city,” Dayap said.

She said that Davao remains strong in the four pillars that are used as the bases for ranking. These pillars are Economic Dynamism, Infrastructure, Resiliency, and Innovation.

Dayap said that for Economic Dynamism, the city continues to build a business-friendly environment and improve the Ease of Doing business while maintaining a good working relationship with the private sector.

“When it comes to resiliency, we are confident that Davao City is one of the best in the country with our current infrastructure and systems. While innovation has been fully embraced with the city’s operations and processes being automated and digitized. In addition, Innovation has become a priority agenda of the local government in recent years that we have in fact established the Davao City Inventions and Innovations Council,” Dayap added.

Davao City Acting City Administrator Atty. Francis Mark Layog, in an interview with the CIO on Friday, expressed his gratitude to the Department of Trade and Industry for “recognizing Davao City as one of the top performing highly urbanized cities”.

He also thanked the city government workers who are behind this success.

“We thank the workers of the local government unit for their continued commitment to sustaining the growth of the city and ensuring the efficient delivery of quality services to the public,” he said.

Layog also said that this award inspires more effort to improve the competitive pillars that the local government shall continue to push forward in attaining its vision to become a globally livable city and a center of excellence guided by its 12 key priority areas.

The awarding body, CMCI, is organized by the Department of Trade and Industry-Competitiveness Bureau through the International Council for Small Business Philippines as the Advocacy Partner.

Now in its 10th year, the Cities and Municipalities Competitiveness Index (CMCI) highlights the conferment of over 100 awards to deserving local government units that have excelled in the five pillars. CIO