HOW must the environment be protected? Rid it of pollutants, says everyone.

In the debate on the waste-to-energy project proposed by the city government, which is more detrimental to the environment?

Of course, there are two obvious sides to the coin here. For Councilor Temujin Ocampo, pursuing the project is a no-brainer for two reasons: the dumpsite will eventually run out of space for the mounting garbage from the city and that, aside from ridding the dumpsite of waste materials that can also cause pollution, the city will have an alternative source of energy.

About two months ago, Ocampo sponsored a resolution that asked President Ferdinand Marcos Jr. to let the national government cough up P3.486 billion as the counterpart for the implementation of the project.

Ocampo said, in explaining the need for the implementation of the project, that the “sanitary landfill, which is almost filled to the brim, and the exponential growth volume of its solid waste, necessitate the adoption and the application of existing technologies that address solid waste management.” 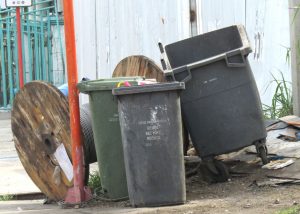 He pointed out that the project is among the existing technologies that have been adopted to address waste management and it “does not only significantly reduce the volume of solid waste being dropped in a sanitary landfill, but also contribute and provide one of the most important resources, energy.”

On the other side of the coin are the environmentalists like the Interfacing Development Interventions for Sustainability Inc. They opined that the project is never a solution to the garbage problem, but will create another bigger problem.

“In reality, what they are after is energy generation and we don’t want our energy to be `unclean.’ In effect, we will contribute to carbon emissions. WTE can cause our carbon emissions and carbon footprint to shoot up. Apart from that, this is not really the sustainable solution. We are just creating another problem,” said lawyer Mark Peñalver, IDIS executive director.

Peñalver’s contention is anchored on the concept that the wastes will be converted to energy using an incinerator that will create harmful pollutants.

These chemical compounds, he explained, are “carcinogenic” as these contain dioxins and furans, compounds that are formed during the incineration process and that “these can put the lives of people in danger.”

He even cautioned that with the facility being in operation, people will wantonly generate more garbage to satisfy its craving for more input.

The idea for the project was first floated about a decade ago when some companies sought the approval of the city government that they be allowed to utilize the wastes in the city to use these as inputs in their energy generation plants.

But the idea was eventually put in the backburner after these companies said they needed at least about 1,000 tons of waste a day for the project to be viable as the volume at that time was just half of the requirements.

In the latest data from the City Environment and Natural Resources Office, the city generates about 700 metric tons of garbage a day, about 200 metric tons more than the volume a decade ago. It is still not known whether the volume is enough to run the facility.

The same idea was resurrected in 2015 after the Japan International Cooperation Agency came up with a study and found its viability in the city.

The idea snowballed and became a proposal when, three years later, the Japanese government said it was willing to partially fund the establishment of the facility as it would donate 5.013 billion yen (about P2 billion at 1 Japanese yen to 39 Philippine centavos).

The project has been passed on to three Duterte mayors, Rodrigo, Sara and the incumbent, Sebastian.

Mayor Baste, who has made an audience with officials of the Department of Environment and Natural Resources to push for the implementation of the project, said it would “become precedent (in the country) and that this is important because this is a grant.”

But the mayor said that even if the national government refuses to heed the city government call as it has been saddled with bigger problems that are needed to be provided solution urgently.

So will the project be implemented, passed on to the next mayor, or totally abandoned?

Either way, the environment will still suffer.