CONGRESSMAN Bingo Matugas continues to work with WSL, USPA, and the Mayor’s Office for the 26th Siargao International Surfing Festival from the 15th of October until the 21st of this year. 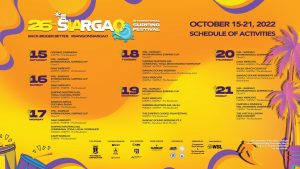 There are only a few days left before the return of the Siargao International Surfing Festival to celebrate its 26th year. Since the pandemic started, the WSL, UPSA, and the participating government bodies have been planning for this event to help local surfers qualify for a spot in the 2023 World Surf League Challenger Series. But this year, it’s more than just that. The 2022 Siargao International Surfing Festival is a tribute to the people of Surigao who, while facing challenges beyond control, still show strength in spirit and continue to cultivate camaraderie in the community through surfing.

Not so long ago, local surfers experienced an unfortunate but avoidable situation. The 1st Governor’s Cup National Surfing Competition was canceled because of the lack of necessary permits and procedures. Sadly, the governor chose to cancel the Gov’s Cup, which affected around 200 surfers, rather than go through the usual process of applying for a mayor’s permit. While waiting for the governor to apply, the mayor’s office prepared and printed the necessary permit, in anticipation that the governor would eventually heed the advice of the DILG Secretary to secure one for the competition.

The cancellation of the Gov’s Cup continues to break the hearts of our community. It is the sworn duty of public officials to uphold the rule of law. Allowing a person as powerful as the governor to do what is forbidden according to the Local Government Code will simply send the wrong message to our community and the whole nation.

Starting October 15, 2022, Mayor Sol Matugas, together with Cong. Bingo Matugas will support not just the surfing community but also our dear Surigaonons by kicking off a week-long festival in Cloud 9, General Luna, and The Boulevard. Many activities are lined up in the hopes of promoting the entire #BangonSiargao movement. This year is more than just a competition—it is a celebration for the Surigaonons who became stronger through staying together.