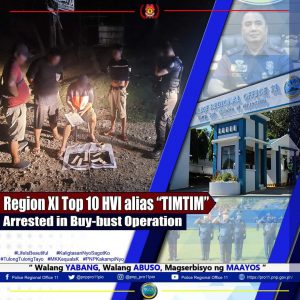 THE Police Regional Office reported its team arrested one of the most notorious peddler of illegal drugs in the region during a raid in Purok Binangga, Barangay Tamisan, Mati City, Davao Oriental, on Oct. 1.

The report identified the suspect as Tamil Ramos Dumagotnot.

The team recovered from the suspect three sachets of shabu and the money used in the operation. The illegal substance was valued at P34,000.

The suspect has been detained at the Mati City Police Station as he was to face a criminal complaint for his activities.