THE city government, through the City Social Welfare and Development Office (CSWDO), has honored 32 centenarians in an event at the Grand Menseng Hotel on Monday. 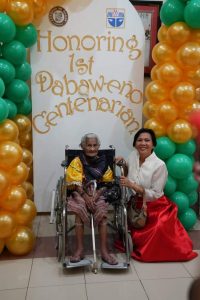 Some of the awardees personally attended the event while some were represented by their family members. Each awardee received a plaque and P100,000 cash.

Eligible for the award are those who turned 100 years old after December 2, 2021, the day the Ordinance Honoring Centenarians was passed.

The event had 11 centenarians who were able to personally attend and receive their award. The 22 other centenarians were represented by family members.

Families of the centenarians said they were elated that their parents were recognized during the event.

“Dako kaayo ang ilang gikatabang ug inspirasyon kay matud pa sa uban nga mga silingan ug kaparyentihan na-encourage sila na magpadayon sa pagka-healty tungod kay naay nagpaabot sa ilaha sa unahan (This is really a great help and inspiration for all because according to our neighbors and relatives they were encouraged to keep themselves healthy so that they could get the promised incentives),” said Reuben Corro, son of 102-year old Emma Corro.

Reuben Corro said the ordinance for the centenarians makes him “proud to be a Dabawenyo” as it only shows that the government really cares about the people.

Lawyer Marlisa Gallo, CSWDO head, said they were happy as it was the first awarding ceremony recognizing senior citizens who reached that age.

Aside from cash assistance, the centenarians who came from far-flung areas like Marilog District were given hotel room accommodations in the morning before the event. CIO