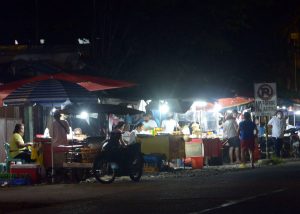 RASAY street in Toril District comes to life as the sun sets when vendors start bringing out interesting kinds of food to display in their tiny stalls with barely a wiggle room or chair for diners. Everyone mills around on what is supposedly a sidewalk in that short stretch of road from Lao street to De Guzman street.

“Rasay street is known for really delicious food,” Janice Rusiana, 19, said. “If you speak of good food here in Toril, people will always show you Rasay.”

“You cannot stop people from patronizing street food,” she continued, “it’s cheap and convenient for us, not to mention affordable.”

On July 15, 2022, a diarrhea outbreak hit Toril district, 21 kilometers south of downtown Davao City, affecting 217 people, including six who died at the hospital. This could be the worst instance of food poisoning in recent memory.

The City Health Office declared the diarrhea outbreak was due to food contamination and pointed to a foodborne microorganism with Vibrio cholera as the “pathogen of concern.”

Acting City Health chief Dr. Ashley Lopez said the most likely vehicle of transmission was contaminated food and that rectal swabs done in patients showed 60 percent were positive in the bacteriological culture testing. Of all those infected, 41 percent reported having dined at food stalls along Rasay Street. At least 21 percent of the cases have taken their food at the district’s public market. The remaining 38 percent of the cases dined in places that could not be traced.

A month after the outbreak, the stalls are back, and it is business as usual.

Poblacion Brgy. Capt. Lilibeth Al-ag said to prevent the recurrence of food poisoning, they do regular monitoring and inspection in the public market and street food stalls. She said this is the job of the sanitation inspectors, but the barangay supports the program of the health center, especially with the sudden scare that happened in July. Al-ag said they are waiting for the city council to pass an ordinance on street food regulation so they can pattern the barangay’s policies on the ordinance, if passed.

There are only three sanitation inspectors in Toril, with a population of 12,393 (2020) and considered one of the highly urbanized districts in the city.

There is a need to review the Sanitation Code of Davao City, as mentioned by Councilor Diosdadao Mahipus Jr., when he urged the City Health Office last July to be proactive to prevent another outbreak. This is echoed by Kenny Sitjar, secretary of Councilor Richlyn Justol-Baguilod, chair of the committee on health, who was then unavailable for an interview.

Sitjar said that the council committee on health has already convened twice to respond to the diarrhea outbreak, the first when the report came out in July and the second when the probe on the cause of the outbreak was ongoing. He said among those items mentioned in the consultation was the review of the existing provisions in the Sanitation Code on ambulant vendors. He also cited there were only about 18 sanitation inspectors in the city, which can’t possibly handle the needs of a city this large.

Councilor Pilar Braga, chair of the committee on education, said the City Health Office could request the council for additional sanitation inspectors.

“It would be impossible for our sanitation health inspectors to do their job because the city has 180 barangays and just in the downtown area, food establishments, including street food stalls are in the hundreds,” Braga said.

“Six people have died, one of them a 10-year-old boy. This is a very serious situation because schools will be opening soon and public schools will begin to hold classes in person. Although we have a DepEd guideline on keeping the canteen nutritious and hygienic for schoolchildren, there is still a possibility that these children will buy from street vendors,” Braga added.

Last July 29, the City Health Office declared the diarrhea outbreak in Toril over.

The first reported case was on July 12 and peaked on July 15, reaching 217 cases from the 18 barangays of Toril district. There were six deaths, the last of whom expired on July 24 at the hospital from cardiopulmonary arrest secondary to severe dehydration.

Dr. Lopez said that most of the diarrhea cases were exposed by eating street foods in Rasay street and the public market in Toril.

“From the investigations, food may have been contaminated during preparation and handling y an infected handler. It was also found that improper storage and delayed serving, and the unsanitary environment may have contributed to the contamination of food,” Dr. Lopez said.

These food stalls are popping out almost everywhere in Davao City, the most popular of which is the Roxas Night Market which draws a large crowd of people, including visitors from outside the region. It has, in fact, become a tourist destination, along with the long thrift shop stalls that open at 5pm and fold at 10pm. 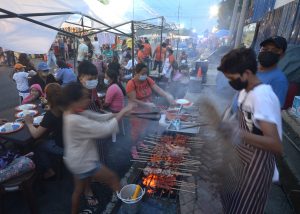 Toril Police Station Police chief Maj. Carol Jabagat said the city will not file any charges against the street vendors but the city should release a guideline on food handling to prevent another outbreak.

City Mayor Sebastian Duterte during his program over Davao City Disaster Radio last August said that he has talked to one of the families who were victims of food poisoning case, and asked them if they will file a case against the food vendors. Duterte said the family

“But we are Filipinos, we love street food,” said Janice. “There’s a risk when we buy food here but we see how well  they handle food and take our chances. That, or go hungry.”

(This report was produced through a story grant from the Philippine Press Institute under the auspices of the Hanns Seidel Foundation. The theme of the journalism fellowship is governance and health.)