Simulation exercise vs. terror inside public school a success

With this, Task Force Davao commander Colonel Darren E. Comia expressed gratitude to all the participating agencies, safety and security forces, and the students, staff and teachers of the DCNHS for facilitating a well-executed SIMEX. 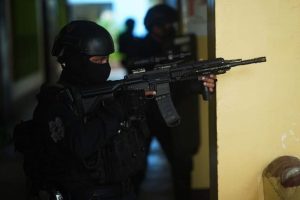 Considering that terrorist threats are just three to four hours close from Davao City, Comia underscored that strengthening the coordination and collaboration among government agencies, including the safety and security clusters, as well as constant preparations, are vital in addressing these situations.

“We believe that with this Simulation Exercise, we can address the situations at hand,” he added.

Duterte, on the other hand, expressed his satisfaction on presiding over his first SIMEX as a Local Chief Executive of Davao City. 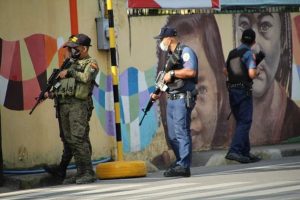 He thanked all the participating agencies especially the Commanders of the Armed Forces of the Philippines’ Air Force, Navy and Army, Davao City’s Task Force Davao, Davao City Police Office (DCPO), Public Safety and Security Command Center (PSSCC) while recognizing the presence and support of Councilor Luna Acosta, chairperson on Committee on Peace and Order and Public Safety.

He also cited o the DCNHS for their support and cooperation on this undertaking.

“Sometimes medyo dili kaayo ma-appreciate but I want to remind you that we are situated in a location where there is imminent threats outside of our borders, wala ta kabalo that any point in time pwede ni mahitabo ug mao na gyud ni ang realidad sa atong lugar dili lang karon kaniadto pa gyud nahitabo nani sa atoa,” Duterte said.

On the same note, PSSCC chief Angel Sumagaysay (Ret) lauded the security forces for properly executing the exercise while thanking all participating stakeholders for the collaboration and cooperation of everyone 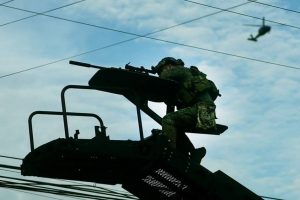 This edition of the SIMEX demonstrated three scenarios of threat which began with a grenade thrown at the entry point of DCNHS followed with a mass shooting and hostage taking, respectively.

The scenarios are inspired with the resumption of the face-to-face classes that makes the learning areas potential and vulnerable targets of terrorist activities.

It fueled the objectives of the joint security forces which is anchored at testing the effectiveness of Culture of Security and Anti-Terror Campaign introduced by the City, and the capability of the AFP, PNP and other Law Enforcement Agencies as well as the concerned Departments of LGU of Davao City in responding to terrorist attack such as the given scenarios.

Included also in the SIMEX was the quick response of the Joint Special Operations Forces which successfully neutralized and captured the perpetrators in a properly-executed manner.