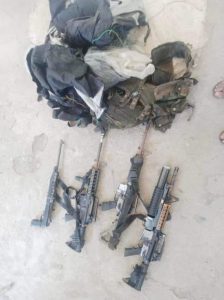 “This extraordinary accomplishment manifests the untiring efforts, motivation, and dedication of the officers and enlisted personnel not only of the 701st Infantry Brigade but of the whole Agila Division,” Mempin added.

The Provincial Peace and Order Council of Davao Oriental declared the said province as Insurgency-Free on Sept. 19 after all the remaining members of the dismantled Guerilla Front 18 were neutralized.