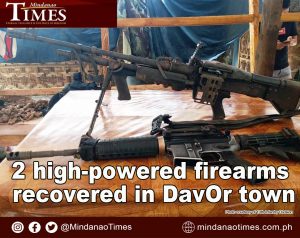 Capt. Mark Anthony Tito, the 10th Infantry Division Public Affairs Office chief, said the recovery of the M60 machine gun and an M16 rifle was a result of the information given by alias Bukawe, team leader of the Weakened Guerilla Front (WGF) 18, who surrendered to the Maco Municipal Police on Aug. 23.

Bukawe said they hid their firearms while deserting their unit to surrender to the government.

Likewise, he reminded them to continue their efforts in dismantling the remaining communist terrorist group in Davao Oriental and entice the remaining terrorists to surrender.