THE EASTERN Mindanao Command (EastMinCom) highlighted its accomplishments, including development projects and the dismantling of 26 guerrilla fronts (GFs) and ten vertical units, during its 16th founding anniversary celebration on Aug. 26. 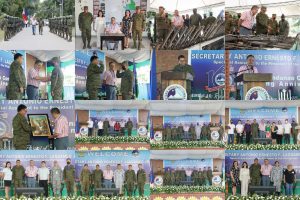 EastMinCom chief LtGen. Greg T. Almerol presented the command’s successes in its campaign from 2017 to 2022, wherein it dismantled 26 GFs and ten vertical units, which account for 40% of the total accomplishments of the Armed Forces of the Philippines.

He also noted that 13 of the said GFs and five NPA Vertical Units were dismantled during his incumbency, which is 50% of the total communist terrorist group (CTG) units dissolved in Eastern Mindanao for the past six years.

After two years of hiatus due to the COVID-19 pandemic, EastMinCom resumed its physical celebration by conducting a series of activities such as Sports Fest, Medical and Dental Civic Action Program, and ceremonial awarding to outstanding Officers, enlisted personnel, civilian human resource, and significant stakeholders.

With the theme, “EMC @ 16: Relentless in the Pursuit of Peace Towards Eastern Mindanao’s Sustained Growth,” EastMinCom commemorated the occasion by showcasing its accomplishments in line with the Campaign Plan “Kalinaw Sidlakang Mindanao.”

The EastMinCom Commander also assured to dismantle the remaining CTG units before the end of 2022.

“I am very optimistic that before the end of the year, EastMinCom with its Joint Task Forces will dismantle the few remaining Guerilla Fronts and NPA Vertical Units,” he said.

Through Focused Military Operations (FMO), intensified stakeholder engagements, and support from former rebels, EastMinCom neutralized a total of 4,797 CTG members in the same period, with 3,579 surrendered, 524 captured, and 403 killed.

On top of these, EastMinCom also helped the Local Government Units uplift the lives of people in former CTG-influenced areas by facilitating the completion of 251 Barangay Development Projects (BDP) under the National Task Force to End Local Communist Armed Conflict (NTF-ELCAC).

These accomplishments were deemed significant in quelling the decades-old communist insurgency as it led to the declaration of Davao del Norte, Davao de Oro, Davao del Sur, Davao Occidental, and Davao City, all in Davao Region as “insurgency-free.”

“Being true to our commitment to the Command’s Campaign Plan ‘Kalinaw Sidlakang Mindanao,’ we gained significant headway championing the foundation of conflict-resilient communities and promoting inclusive growth,” Almerol remarked.

The EastMinCom Commander also did not fail to mention their efforts to assist the areas affected by the onslaught of Typhoon “Odette” in 2021 by deploying the Joint Task Force Sambisig to ensure effective and efficient humanitarian assistance and disaster response.

In his message, Almerol expressed his gratitude to all EastMinCom personnel, the ground Commanders, and the support of the stakeholders for their “relentless efforts in attaining our desire in the pursuit of peace and sustained growth in Eastern Mindanao.”

“Given our numerous meaningful achievements, we triumphantly achieved significant milestones through the collective efforts of the men and women of EastMinCom. The gains we have achieved would not be made possible without the sterling leadership of our Commanders on the ground, along with the constant support and cooperation of our stakeholders,” he said.

As they celebrate another year, Almerol enjoined his troops and all stakeholders to remain undaunted and steadfast in accomplishing their campaign objectives and have the fortitude to surmount the challenges ahead.