DAVAOEÑOS and tourists alike can bring their friends and families to the nightly Kadayawan 3D mapping light show at City Hall, which formally opens at 6 p.m. on Aug. 5.

Councilor Al Ryan Alejandre, the spokesperson of the Kadayawan Executive Committee (Execom), said the 3D mapping light show would start after the official opening of the Kadayawan Tribal Village at Magsaysay Park, which was scheduled at 4 p.m. on the same day. 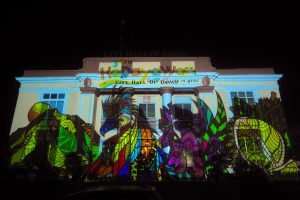 Meanwhile, he added that renovations are still ongoing at the Kadayawan Tribal Village but it will be ready for the 4 p.m. opening on August 5, 2022.

A series of activities will be featured in the village. Tribal representatives will demonstrate how they cook or weave in their respective houses. Visitors can also view what’s inside each tribal house.

However, the formal opening of the 37th Kadayawan sa Davao Festival is set on Aug. 15 at the Bantawan Amphiteatre after the 3 p.m. thanksgiving Mass.

Mayor Sebastian Duterte shared on his Facebook page the City Government of Davao’s reminders to ensure everybody’s safety and security while taking part in the Kadayawan sa Davao festivities.

Davaoeños, guests, and tourists are also urged to use hats and fans, choose a shady spot, bring candies and crackers, bring an extra shirt, only bring transparent tumblers and use pedestrian crossing lanes.

The use of drones is prohibited, except for those with security clearance.