AS President Ferdinand Marcos Jr. addresses the country today to outline his programs in the next six years during the state-of-the-nation address, the business sector in Mindanao has also called on him to implement key initiatives. 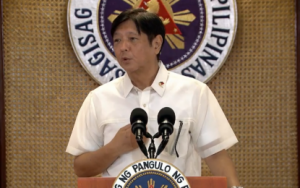 Arturo M. Milan, regional governor of the Philippine Chamber of Commerce and Industry, said the new administration should sustain the gains that the country has achieved under then President Rodrigo Duterte.

“As Mindanaoans, we want these sustained and even enhanced because there are still many to be done in Mindanao,” Milan said in a message to TIMES, in reference to the achievement of the Duterte administration particularly on peace and infrastructure programs.

Milan said his group has developed a 12-point agenda, among them sustaining the peace and security both in the Bangsamoro Autonomous Region in Muslim Mindanao, the continuation of the National Task Force to End Local Armed Conflict and the fight against illegal drugs.

Issues that it wants addressed are;

– Digitizing of government processes and implementing strictly the ease of doing business and paying of taxes,

– Improving transportation and logistics in the Island,

– Inculcating love for country in our basic education, strengthen science and math and open post graduate studies to foreign universities to set up their branch in the country;

– Promoting the manufacturing sector in Mindanao, work on the revival of the paper, cotton and other industries and establish an integrated steel Mill in Mindanao.

– Including and promoting Mindanao as a major tourism destination and undertake Tourism related development projects,