Manhunt on for three jailbreakers

THE DAVAO City Police Office (DCPO) is still on the hunt for the three detainees who bolted their jail in Sasa Police Station on June 16. 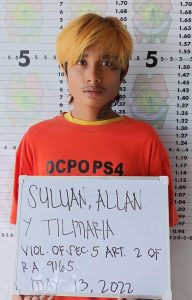 One of the fugitives was identified as Alan Suluan, 22, about 5’5” in height, small built, with a tattoo on the lower portion of the left eye and both arms. He also has a feather tattoo on the left side of his neck.

The last suspect is Agdokahal Montasi, 18, 5’7” in height, medium built, with a tattoo on the lower portion of his right eye and his neck.

Gaspan said the three suspects have a pending case for violation of section 5, Article 2 of R.A. 9165 (Comprehensive Dangerous Drugs Act of 2002).

During an investigation, the police found out that they cut the round steel bar using an improvised saw. They manage to evade detection since they escaped through the back portion of the detention facility.