DAVAO CITY (MindaNews) – After more than two years, the People’s Park will be reopened next month after it was shut down as authorities prohibited mass gatherings to avoid transmission of the highly infectious coronavirus disease (COVID-19).

Engr. Juancho B. Dagasohan, acting chief of the Parks and Playgrounds Division at the City Environment and Natural Resources Office (CENRO), told Davao City Disaster Radio (DCDR 87.5) on Tuesday that outdoor activities will be permitted once it reopens its gates to the locals. 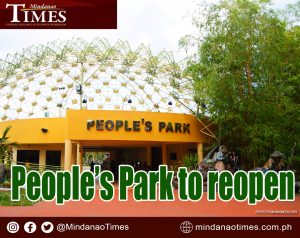 The People’s Park is one of the city’s largest sites for swabbing at the height of the COVID-19 surge and later as a vaccination hub with a drive-thru.

He said the gated public park, a popular go-to place for exercise and other outdoor activities, will resume its operations as the Davao City COVID-19 Task Force will move the vaccination program from the existing hubs to the barangay health districts.

“Your dream to jog at People’s Park again will happen soon, maybe, starting this month of July. Once the local government transfers the vaccination to the barangay health districts, that’s the time when we can finally reopen it. As of now, it’s used as a venue for vaccination,” he said.

Dr. Michelle Schlosser, the spokesperson for the task force, said last Friday that the vaccination drive at the People’s Park and the privately-owned Davao Crocodile Park will operate until the end of June.

Dagasohan added that the local government has set aside a budget for the renovation of the public park. The park now houses the five-story gallery of the National Museum of the Philippines (NMP), which is set to open in December this year.

“We have a budget for the renovation of the People’s Park. However, it did not push through when the pandemic happened,” he said.

Dr. Josephine Villafuerte, head of the city’s vaccination cluster, told DCDR. 87.5 that they are closing all vaccination hubs in malls and schools by June 30, but these services will be transferred to the 18 district health offices.

The city also reported 269,057 individuals who received the first booster dose and 20,828 who were administered the second booster dose.

She said the local government has decided to shut down existing hubs since only a few people visit the hubs to avail of the vaccination against COVID-19.

She added that scheduled vaccination will be done in communities to reach out to more residents. (Antonio L. Colina IV / MindaNews)