BARMM Benchmarked at the PWC of Davao

IT WAS the first-ever benchmarking activity by the Bangsamoro Autonomous Region of Muslim Mindanao (BARMM) held last May 11, 2022, at the PWC of Davao, opening the door to both institutions for potential networking, collaborations, and synergy in the future innovative programs and projects. The Cities and Municipalities Competitiveness Index is to be undertaken – Innovation Pillar.

Bangsamoro, officially the Bangsamoro Autonomous Region in Muslim Mindanao (BARMM), is an autonomous region in the Southern Philippines. It replaced the Autonomous Region in Muslim Mindanao (ARMM). BARMM ratified its fundamental law, the Bangsamoro Organic Law, following a two-part legally-binding plebiscite in Western Mindanao held on January 21 and February 6, 2019. The Commission on Elections confirmed the ratification a few days later, on January 25. The establish-ment of Bangsamoro was the culmination of years of peace talks between the Phil-ippine government and several autonomist groups. It is, in particular, the Moro Islam-ic Liberation Front or MILF, which rejected the validity of the ARMM and called for the creation of a region with more powers devolved from the national government.

Prof. Vicente Antonio V. Pijano III, PWC Chancellor and Chief Operating Officer (CCOO) delivered a welcome message and introduced the PWC of Davao. He mentioned the innovation initiatives being undertaken by the PWC of Davao. 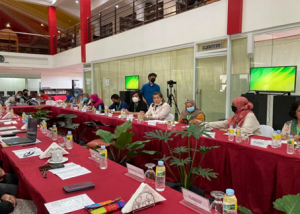 Also, Prof. Pijano shared the many projects and grants PWC of Davao received from various ex-ternal organizations and agencies. After introducing the PWC of Davao team members, he fervently hoped for a very productive meeting and possible partnerships and collaborations with BARMM in future endeavors.

Director Hussein R. Biruar of the Bureau of Trade and Industry, BARMM, presented the BARMM Party by introducing them to the PWC Community. He presented the BARMM’s vision and mission. He shared the region’s development plans in terms of its industrial development, investment promotion, enterprise, and trade development with the inclusion of youth enterprise, trade regulation and consumer protection, consumer education and advocacy, and a lot more. He also presented the AVP BARMM’s history and a glimpse of its aims for the whole region.

Ms. Rosslaini Alonto-Sinarimbo, the Director-General of the Ministry of Trade, Investment and Tourism (MTIT), gave the closing message. She thanked PWC of Davao for the very warm-welcome and learning-filled benchmarking activity. She mentioned that the benchmarking is like a magical genie that sparks and gives them answers to some of their questions and doubts on what areas to focus on and collaborate with PWC of Davao to help solve some problems they face in their region. They are all excited about a possible collaboration with Halal, Food, Fashion, etc. DG Alonto-Sinarimbo hopes for another one soon.

The activity was indeed a success. The BARMM delegates were pleased with how they were welcomed and treated and what they learned from the benchmarking. To them, this is an initial step to forging a partnership with PWC of Davao in the future for any collaborative programs and initiatives.

The focus that the two institutions could collaborate on includes Halal Food, Fashion and Creative Industries, Clothing, Capacity Building on developing its people and exposing them to PWC Labs, and Mirror Facility Model in the establishment of FPIC and other laboratories, and Technology Transfer.

The event ended with so much vision to look forward to in the next few days. Another hopeful event is to be planned soon, and this will be a second-round table of discussion for a possible inking the linkage and partnership of PWC of Davao and BARMM. Contributors: Dr. Reynald Japay / Maria Julieta R. Torres