Lions taking action for the environment

MEMBERS of the Chinatown Lions Club, with support from the Knights of Columbus of Mintal and Catalunan Pequeño,  planted 500 bakhaw mangrove propagules at the Aboitiz Cleanergy Park at Sitio Punta Dumalag, Matina Aplaya, Davao City on April 5, 2022.

Chinatown’s Lions Club, a socio-civic organization and one of the partners of the Aboitiz Cleanergy Park, aims to strengthen its commitment to the environment and the community through coastal clean up and tree planting activities 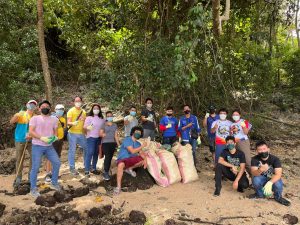 On the same date, the employees of Davao Light from the Planning and Design Department conducted a coastal clean up along the shore of Aboitiz Cleanergy Park. They are also the first group of employees to revisit the park since the pandemic hit the country.

“With restrictions now lifted, the team decided to go back and check the area once again after more than two years. It’s also a way for us to introduce the Cleanergy Park to our new team members,” Mar Ulysses Relacion, Head of Power Systems Planning Department, said.

“Before the pandemic, we [did] regular coastal clean ups and contributed in our own simple way to preserve the Cleanergy Park” Mar added.

Among the participants of the coastal cleanup are Cadet Engineers Macky Sabordino and Mae Berleen Dela Cerna. “It was a fun activity. I entered Davao Light two months ago and this is my first [coastal] clean up experience,” Macky said.

“It would be dangerous if left alone,” Macky described that aside from rocks, the coastal area has a lot of broken glass swept by the waves onshore. These shards of glass may also harm the critically endangered hawksbill turtles that visit the shore to lay eggs.

“Regardless of how much we clean, the garbage will eventually come back,” Mae expressed, recognizing that while the coastal clean up is a temporary solution, the said activity can still help, no matter how small. “We hope to come again and possibly do other activities such as tree planting,” Mar Ulysses Relacion said.

Aboitiz Cleanergy Park is an eight-hectare biodiversity park, a nesting ground of the critically endangered hawksbill turtles, and a haven for over 100 bird species. The park is managed by AboitizPower subsidiary Davao Light, and Aboitiz Foundation, Inc.