The reports said three of those arrested – Ronnie Niño L. Uy, Jereco Mangigo Cagadas and Elvis Bentoso Guanlao – were trying to sneak the prohibited substance into the city. 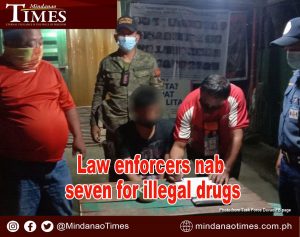 The other suspects were Jeffrey Albaran and his visitors identified as Jerico Autencio, Manuel Calsa and Jessie Mangubat. They were collared on Wednesday while allegedly holding a shabu session in what the police called a shabu den in Purok Holy Cross, Barangay San Antonio, Agdao.

In the case of Uy, a resident of  Purok 3-B RTU Village Apokon, Tagum City, Davao Del Norte, Captain John Louie Dema-ala, Task Force Davao spokesperson, he was entering the city on Maundy Thursday when two sachets of shabu was seized from him at the TFD checkpoint in Lasang. The value of the illegal substance was at P23,520.

On the same day, law enforcers collarged Guanlao of Consuelo, Bunawan, Agusan del Sur when he yielded a sachet suspected of containing shabu also at the same checkpoint.

In the case of Albaran, Nephi Noli Dimaandal, spokesperson of Philippine Drug Enforcement Agency (PDEA) XI spokesperson, said that he was nabbed when he tried to sell a sachet of shabu to a police agent, who was a member of the team from the PDEA-XI, National Bureau of Investigation SEMRO XI and Philippine Air Force.

Dimaandal  said Albaran’s visitors were also handcuffed as they were holding a shabu session at the place.

Seized from them were four sachets of what was believed as shabu weighing 14 grams with a value of P210,000.

Criminal complaints were still being prepared for all of the suspects.