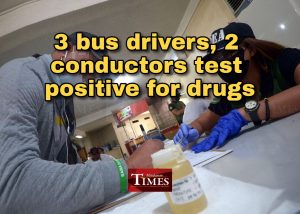 Nonito Llanos, the regional director of the Land Transportation Franchising and Regulatory Board (LTFRB) XI, said based on their data, a total of 155 drivers and 90 conductors at the terminal were subjected to a surprise drug test under “Oplan Harabas” as part of the security measures for the Holy Week.

In a separate interview, Land Transportation Office XI director Neil Cañedo, said a total of 14 drivers in the cities of Davao, Digos, and Tagum failed the drug test.

Cañedo said they will face a case for violation of Republic Act 10586 (An act penalizing persons driving under the influence of alcohol, dangerous drugs, and similar substances, and for other purposes).

PDEA XI director Aileen Lovitos, said they implemented Oplan Harabas to ensure the safety and security of the passengers from reckless drivers who will ferry them to their respective destinations while under the influence of drugs.

The PDEA is also asking everyone to help the government attain its vision for a drug-free country by reporting to its office those who are involved in illegal drug activities. People can call or text at numbers 082-228-1603 and 09331481387.