WATER RATE HIKE | Increase to be implemented in tranches 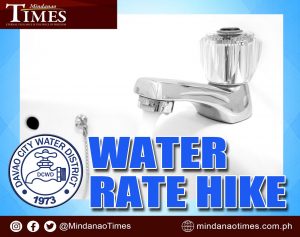 Jovana Cresta Duhaylungsod, spokesperson of the utility, told TIMES in a phone interview that the increase would be the first since 2005 and that, if approved, “it would be implemented in three tranches.”

Under the proposal, Duhaylungsod explained, 30% the rate increase would be implemented upon approval, 20% the next year and the remainder in the third year.

Under the proposal and if fully implemented, those who use 10 cubic meters a month will pay about P100 more. At present, these users pay P137.30 a month.

The water utility filed the proposal before the Local Water Utilities Administration (LWUA) in January with the hope of getting the approval two months later, although the regulatory body has required the applicant more documentation to substantiate its application.

The filing of the water rate increase application took place a month after the public hearing that was held at the water utility’s parking area at its building in Matina lot in December.

The increase, Duhaylungsod said, is necessary because “without it there will be some infrastructure projects that will not be implemented” as these projects will respond to the growth of water requirements of the city.

The proposed water rate increase will be used to fund the expansion and improvement projects and operation expenses of DCWD based on its 10-year development plan,”

The application for the water rate increase was supposedly submitted in 2019, but the pandemic prompted the water utility to delay its submission.

Also submitted this year was its 10-year development plan, which was supposed to cover the programs between 2020 and 2030, but has been shortened to just eight years of implementation also due to the pandemic.

The development plan, which was submitted as part of justifying the application for water rate increase, is also aligned with the development plan of the city government to make sure that the water requirements are addressed.

Under the plan, the target is also increase the number of water supply systems from 11 by the end of the year to 23 in 2030 and the number of production wells from 77 to 115.

“With the development of additional sources, DCWD will also be developing complementary facilities which include additional storage facilities and pipelines and installation of appurtenances for improved water supply distribution,” she added.

The plan is also to increase the number of served barangays from 118 to 146, including the rural areas of the Second and Third Districts.

Under the development plan, among these projects are those to be implemented will expand the coverage of the water utility as, based on the pre-pandemic period record of the water utility, there were about 100 applications for service provisions of condominiums and subdivision projects, some of them would start operating in 2025.

Also, part of the amount that would be generated by the increase will also be used to offset the losses of the water utility during the height of pandemic when many establishments decided to either permanently or temporary closed down, Duhaylungsod said.

However, she said, it was unfortunate that the application for water rate increase was filed when the country has been grappling with the impact both of the pandemic and the increase in prices of petroleum products.

Prices of petroleum products have gone up since last year and the increments have been exacerbated by the armed conflict between Russia, a huge petroleum producer, and Ukraine.

Duhaylungsod also assured the public that when the bulk water project starts operations, the prevailing rates by then will be adopted.

The water district and the Apo Agua Infrastructure have teamed up for the implementation of the water project, which is tapping the Tamugan River to produce about 300 million liters of potable water a day to serve the city, particularly areas in the second and third districts that can hardly be reached at present.

The project, which will serve as the lone surface water source of the city, was supposed to have started operations in December last year, but no update has been provided as yet.

In explaining the move to divide the water rate increase, this was based on the experience of the water utility in 2005, when upon approval of the application, then mayor Rodrigo Duterte sought for the its staggered implementation.

Although the first 30% of the increase was implemented that year, part of the remainder was only implemented in 2011 when the mayor was the present mayor, Sara Duterte. It also took the water utility to implement the remaining increase as the mayor also requested that it be divided into three with additional 10% each year.