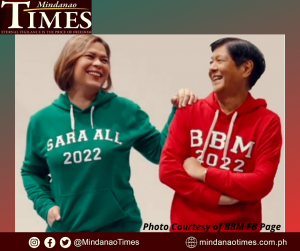 IN his speech inside the gym in Carmen, Davao del Norte, Marcos emphasized his call for unity, a theme that his slate has used to lure voters to support his ticket, which is branded as UniTeam.

Marcos, toward the end of his speech, even took a line from a song in the 1980s which was considered among the patriotic songs of that era. “Ako ay Pilipino taas noo kahit kanino. ” He quoted a line from the song “Ako ay Pilipino” which was popularized by Kuh Ledesma and was written by George Canseco in 1981.

In emphasizing the message of unity in his 25-minute speech, Marcos said he is “kasama sa kilusan ng pagkakaisa (part of the revolution for unity),” as he said the party is also a product of the combined forces from different parties.

“Tayong mga Pilipino hindi po tayo palaaway, hindi po tayo naghahanap ng gulo (We Filipinos are not troublemakers. We do not actively seek out conflict),” said Marcos, whose father ruled the country for 20 years as a strongman.

The rally also saw the joining of forces of groups against Alvarez, the leader of most of the incumbent officials in Davao del Norte province, including its governor Edwin Jubahib.

Among those present were former governor Anthony del Rosario and former Tagum City mayor and now outgoing Vice Gov. Rey Uy, who is gunning for his old position.

In the 2019 elections, del Rosario and Uy were from different parties as del Rosario ran against Alvarez, who was then the partymate of the latter in the Partido ng Demokratikong Pilipino. Del Rosario was running under the Hugpong ng Pagbabago, a newly formed party formed by Duterte where he also serves as its spokesperson.

In the upcoming election, Uy and his son De Carlo are joining the HNP as the young Uy is seeking the post of his father.