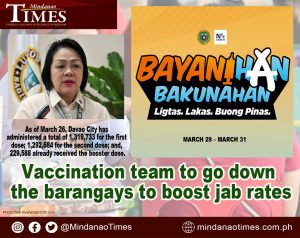 THE CITY Vaccination Cluster will roll out another Bayanihan Bakunahan starting March 29 to 31, and this time the vaccination drive will include the grassroots level, as well as at the identified vaccination hubs.

Speaking over the Davao City Disaster Radio on Monday, City Vaccination Cluster head Dr. Josephine Villafuerte said the city will adopt the per barangay strategy to increase the vaccination rate.

Villafuerte added that the cluster has a list of barangays with low vaccination coverage.

“Mag-set up pa sila didto and naa pud mag house-to-house (They will set up in the area and also do house-to-house vaccination),” she added. Villafuerte said that administering the booster doses is the main priority.

“Hopefully, once ma-immunize ang tanan the more na maglisud ang virus na mag-mutate (Hopefully, once everybody are immunized it will be difficult for the virus to mutate),” Villafuerte said.

Villafuerte encouraged Davaoeños to be vaccinated and get vaccination cards because it may be required in some areas or establishments.