IT IS  on February 01 of each year that World Hijab Day is given importance not only in the Philippines but in other parts of the world. But first let me share with you what the term Hijab means as we referred to Google: “A hijab is a veil worn by certain Muslim women in the presence of any male outside of their immediate family or sometimes by men, which covers the head and chest. Wikipedia.

As a way of raising awareness about the Hijab, Honorable Commissioner Dalisay “Alleya” N. Macadawan, Al Hadj of the National Commission on Muslim Filipino Women organized a gathering at Riverpark, Barangay Waan, Davao City and gave the Opening Remarks. The Theme for the program was “The Essence of Hijab in Today’s pandemic”.

After the speakers gave their views, we listened to the Impression of Sister Norhayya D. Macasang. Guest of Honor and Speaker was Hon. Mayor Adalia “Ada” Lopez, Municipal Mayor of Banay-Banay, Davao Oriental who gave an Inspirational Message.

According to Hon. Consul Henny Mulliyani, “We know Hijab is a test for the Muslim woman. It is clear that from the Qur’an and the Hadiths that the Hijab is a religious obligation, which a woman has to undertake. In the context of dress particularly the changing lifestyle in wearing hijab, it involves the process of transition in the post-conversion period whereby the new Muslim women gradually learn how to adopt a new style of wearing dress in accordance to Islamic law of conduct.”

“The Hijab has become a powerful symbol of a culture and ideology that often seems at odds with modern ‘ideals’. However, for Muslims, it is far more functional than symbolic. Interpretations of its purposes include modesty, an act of worship and an expression of identity. Wearing the Hijab is not out of style. There are many modern styles of Muslim wear for students, at office, for parties. Now Indonesia is a center of Muslim wear in the world, exporting to Dubai, Malaysia, Brunei and other places.” 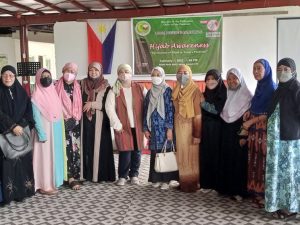 Hon. Consul Henni Mulliuyani continues: “The act of wearing one’s faith on his sleeve plays an important role in affirming a Muslim’s self-identity.”

Hon. Commissioner Amielyn “Asliyah” Limbona says “Wearing the Hijab promotes Muslim Traditions, fosters religious tolerance and understanding between communities, and encourages women of all backgrounds and experiences. Wearing the Hijab and the Burqa is an act of modesty and dignity”.