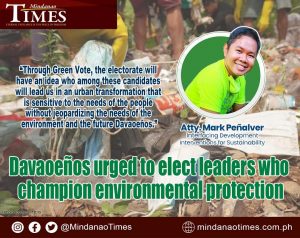 DAVAO CITY (MindaNews) — A Davao City-based environmental group urged residents to elect leaders in May 2022 elections who can champion environmental protection amid the growing concerns on the climate crisis.

Atty. Mark Peñalver, executive director of the Interfacing Development interventions for Sustainability (IDIS), told MindaNews on Saturday that this city needs leaders who have the political will to ensure clear and strict implementation of local ordinances that are intended to protect, conserve, and manage the environment.

“We need someone who has the courage to stand and defend environmental rights even though it may be unpopular, someone who understands and values inclusivity in policy and decision making,” he said.

He said that IDIS launched “Green Vote 2022 Survey” to help Davaoeños choose who among the candidates have a clear and significant platform to address environmental issues, including, among others, the effects of climate change, flooding, increasing urban heat, reclamation of urban wetlands, deforestation, and waste management.

The survey forms will be forwarded to all candidates running for elective posts in the executive and legislative branches:  mayor, vice mayor, representatives, and councilors to know where they stand on issues involving watershed protection, solid waste management, and zero-waste lifestyle, urban livability, good agricultural practices, sustainable/clean energy, and policy bottlenecks and good governance, according to a briefer released by IDIS.

It will also highlight the candidates’ platforms on “environmental management and their views and decisions on various environmental issues” as well as their stand on halting the cutting of old-growth trees at declared conservation zones such as in Mt. Makabol-Alikoson and Kalatong, the increasing wastes, and pollution of the sanitary landfill, the proposed waste-to-energy facility, resumption of aerial and chemical-based spraying in mono-crop plantations, quarrying and extraction of resources, and the Samal-Davao Bridge and other large infrastructure projects affecting the environment.

It said that IDIS targets to release the results of the survey in April 2022.

“Through Green Vote, the electorate will have an idea who among these candidates will lead us in an urban transformation that is sensitive to the needs of the people without jeopardizing the needs of the environment and the future Davaoeños,” he said.

Peñalver said it is important that candidates should include in their agenda environmental protection and climate crisis as the city has been experiencing the brunt of climate change in recent years.

Launched in 2019, he said the Green Vote would help Davaoeños “know the environmental platforms of the candidates as these candidates will be responsible for taking us out of and protecting us from the threats brought about by the effects of climate change.

He said the Green Vote influenced Davaoeños in electing leaders in 2019 who lobbied for environmental ordinances such as “No to Single-Use Plastics,” the Save Heritage Trees Ordinance, and the Regulation of Recreational Activities in Watershed Areas.

“However, there are still certain concerns. We cannot totally say that they are pro-environment as there are certain issues that they have no clear position or, if clear, definitely not one for the environment,” he said. (Antonio L. Colina IV / MindaNews)