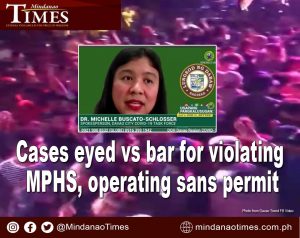 A CITY government official said Monday cases will be filed against a bar for operating without a business permit and for violating protocols against COVID-19 particularly its failure to implement the minimum public health standards (MPHS).

In a story of the City Information Office, Dr. Michelle Schlosser, COVID-19 Task Force spokesperson, said the police also issued citation tickets to those violating the standards during the visit to Supladoz Ilustre Restobar on Saturday.

She added the Business Bureau has also issued a cease and desist order against the establishment.

This developed as Schlosser said the city government is looking at maintaining the Alert 2 Level especially if more violations against the protocols are recorded.

The TIMES tried to contact the bar for its side of the story, but failed.

Initially, Schlosser said, investigators found out that the bar had no business permit and that its management did not implement the health standards.

She added the City Legal Office has joined in the investigation as the Business Bureau and the enforcement team were set to meet with business establishments yesterday.

“We will remind them of the minimum public health standards. I-remind namo sa ilaha nga they will not receive a safety seal without following those needed for them to achieve it. At the same time, daghan na kaayo ta na-deputize dili lang atong mga police personnel, we are also deputizing people from (the) response cluster so that we can all help in making sure na implemented ang pag follow sa MPHS,” she added.

The controversy came about after the city government lifted the implementation of drinking of liquor in public places like restaurants and bars.