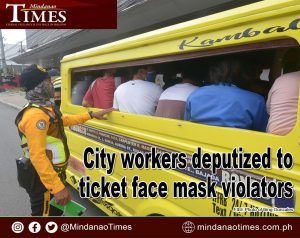 A TOTAL of 226 newly deputized personnel from various offices have completed the two-day training on the enforcement of Davao City Ordinance 0307-20 or the Mandatory Wearing of Face Mask at Public Places.

The deputized personnel will be deployed in the city streets and offices of the city government to enforce the ordinance, including the issuance of the citation tickets with a penalty of P500 to violators.

Sumagaysay said that the deputization of the personnel is a holistic approach in the enforcement of the COVID-19 protocols since they could still do the task in their offices while also giving citation tickets at the same time.

He said a deputized personnel can call the attention of a person not wearing a face mask, inform the person of the violation, then issue a citation ticket.

He added that the majority of the trained deputized enforcers are from the CTTMO who are already assigned in their areas of responsibility as far as Calinan. Enforcing the COVID-19 protocols to control the spread of the virus would be their additional task.

Sumagaysay added that no such deputations would have been needed if the people comply with the wearing of face masks.

“Kung compliant lang ang kada isa sa Davao City, dili naman nato kailangan ni siya (deputization) but then, naa pa ang pandemya and naa sa atoang palibot ang uban nga kaigsoonan nga dili gihapon nagasunod ilabi na ang pagsul-ob sa face mask (If only the people comply there would be no need for this {deputization} but there are still many around us who does not follow, especially the wearing of face masks),” Sumagaysay said.

Sumagaysay hoped that the additional personnel would serve as a deterrent for those who want to violate the Mandatory Wearing of Face Mask Ordinance. He advised people to cooperate with the regulations of the city and always follow the minimum public health standards (MPHS), especially the Face Mask Ordinance.

“Dili lang ta maghulat nga isyuhan ta og citation tickets. Unta maging responsable kitang tanan na makipag cooperate sa atoang gobyerno kay sa tinuod lang luoy kaayo ang atoang health workers ani pag-atiman sa atoa, so tabangan nato health workers, city government, kaugalingon pinaagi sa pagpatuman sa MPHS (We should not wait that we will be issued with citation tickets. We should be responsible and must cooperate with the government because our health workers suffer in taking care of us, so we must help them, the city government, and ourselves through following the MPHS),” Sumagaysay said.

Sumagaysay said that the deputized personnel are only waiting for the deputization order before they can start issuing citation tickets.