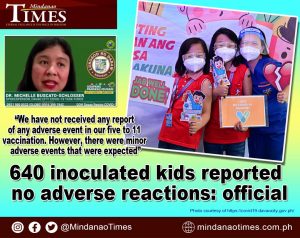 AT LEAST 630 children reported no adverse reactions after they were inoculated with their first dose of the reformulated Pfizer vaccine during the pilot pediatric vaccination rollout for 5 to 11 years old.

The side effects experienced by the kids included pain on the inoculation site, fever, body pain, or headache. She said there were no cases of hyperactivity or anything that merited hospitalization.

She also said that the city government aims to roll out the pediatric vaccination for 5 to 11 years old on Feb. 21 in special sites, including the Almendras Gym, the San Roque Elementary School, and the Vicente Hizon Elementary School, depending on the vaccination supply and logistics. These sites, according to Dr. Schlosser, will be open to the public.

Just like the successful pilot rollout in hospitals, the city’s special sites and district vaccination sites for the target kids will also be as friendly, playful, and less threatening.

Schlosser said the Southern Philippines Medical Center, the Davao Medical School Foundation (DMSF), and the Seamen’s Hospital have set up their sites to be a pleasing environment for the children.

In social media photos during the first day of the SPMC rollout, kids were seen enjoying the food cart treats, magic show, and photo booth, among other kid attractions.

Davao Doctors Hospital, she said, is set to start its pediatric vaccination for 5 to 11 years old children on Thursday, February 17.

Schlosser urged parents and guardians to convince their children and condition their minds on the need to avail of the COVID-19 vaccine just like any routine vaccine.

Before bringing their kids to the vaccination sites, she reminded parents to register them first on the Safe Davao QR website (https://profiles.safe-davao.com). A PSA birth certificate or valid student ID must be presented for the DQR registration.

To pre-register for the DMSF pediatric vaccination hub, parents must sign up their children on https://bit.ly/dmsfresbakunakids or check out the instructions here https://www.facebook.com/davaocitygov/posts/5153495518035262.