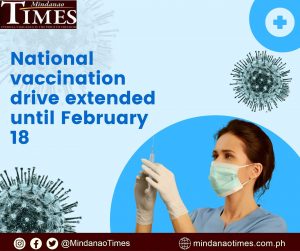 THE “BAYANIHAN Bakunahan Part 3” has been extended until Feb. 18 after the low turnout of vaccinees on Feb. 10, the first day of the third National Vaccination Days (NVD).

She said only a total of 5,662 individuals showed up to get themselves vaccinated on the first day of the NVD. Of this number, 618 received first doses while 2,844 got second jabs, and 2,200 availed of the booster shots.

“The Bayanihan Bakunahan 3 will be extended up to Feb. 18 para lang gyud ma-secure ug mapaspasan nato atoang mga booster doses. Mao atong gina look forward karon kay ubay-ubay na ang atong fully vaccinated individuals (The Bayanihan Bakunahan 3 will be extended until February 18 to secure and hasten the rollout of booster doses. We are looking forward to that since we have a lot of fully vaccinated individuals),” Schlosser said.

She sought the help of the media to let the public know the importance of getting a booster dose.

She also said that Davao City is fortunate to have achieved almost 100 percent of its target herd immunity and that it can now just focus on the boosters.

Schlosser added that boosters will give people 25-fold protection against the severity of COVID-19 symptoms. She urged fully-dosed Davaoeños, including pregnant women on their second and third trimesters, and lactating mothers to avail of the boosters as well.

To provide more opportunities for the public to get vaccinated, she said the drive-thru vaccination at the Crocodile Park will start operating on Saturdays beginning February 12, along with the vaccination site at People’s Park. The most preferred brands, Pfizer and Moderna, are available at these two parks.

The rest of the city-managed vaccination hubs will resume operations today, which also kicks off the pilot vaccination rollout for the pediatric population 5-11 years old at the Southern Philippines Medical Center (SPMC), Davao Doctors Hospital (DDH), and DMSF Hospital, and the Seamen’s Hospital.