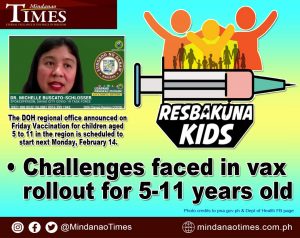 LOGISTICAL challenges, including the late arrival of vaccines, have hounded the vaccination rollout for children aged between 5 and 11, a top official said.

Dr. Michelle Schlosser, City COVID-19 Task Force spokesperson, said over the weekend that the Department of Health released an advisory on Thursday on the postponement for the rollout of the program.

Schlosser also cited the postponement of the same rollout in the National Capital Region which was first reported to start the process on February 4.

But the official welcomed the postponement as this would give the vaccination cluster team more time to prepare for the better implementation of the process. “Our Vaccination Cluster Team po is really preparing na ma rollout sya next week. We are pushing for next week but we are also dependent ang atoang pag-roll out kung naa ta’y mareceive na vaccines at the same katong mga special syringes for our five to 11 years old,” she said.

The DOH regional office announced on Friday Vaccination for children aged 5 to 11 in the region is scheduled to start next Monday, February 14.

Dr. Janis Olavides, head of the DOH regional office’s vaccination campaign, told a virtual press conference on Friday that they are strengthening the information drive on the importance of vaccination to encourage parents and relatives to get children of this age group protected against the coronavirus disease (COVID-19).

Olavides said the rollout would be necessary to protect students of this age group in preparation for the eventual reopening of face-to-face classes after two years of remote learning.

According to the DOH, Comirnaty vaccines of Pfizer-BioNTech was granted emergency use authorization for five to 11-year-olds while Comirnaty and Spikevax of Moderna for minors aged 12 to 17.

Olavides said the five to 11-year-olds will receive the 0.2 milliliter (mL) and a higher formulation of 0.3 mL for the other age groups. For this reason, the DOH regional office will recommend a separate lane for the youngest age group to avoid mix up of vaccines intended for the older population.

Schlosser added that in the city, the vaccination team is engaging tertiary hospitals for the rollout as the Southern Philippines Medical Center might not be able to join the activity because it is grappling with the high number of COVID-19 cases.

Other local governments are still in the planning phase where to hold their respective vaccinations, Olavides said.

“I think some hospitals are still discussing if they will also be part of the vaccination,” she said.

In a statement last February 3, the Alliance of Filipinos for Freedom and Informed Choice expressed alarm over the hasty move of the government to start the vaccination for the children without ensuring that vaccines are safe for them.

“Consistent with our mission of advancing children’s protection in the face of COVID-19, we, the Alliance of Filipinos for Freedom and Informed Choice, stand that the vaccination of our children against COVID-19 does not meet the established principle of first ensuring that no harm is done,” it said.

It added that vaccinating children against COVID-19 exposes them to risks that “far outweigh the hoped-for benefit, especially given that children have an extremely low risk from this disease.”

The group said there is no justification “to hurry the vaccination and put children in harm’s way at this time” and called on the government, as a signatory to the United Nations Convention on the Rights of the Child, to uphold Filipino children’s right to life, survival and development.

“The Philippine state, as a main duty-bearer of accountability for the protection of children’s rights, is duty-bound to banner the children’s best interest foremost in public health by ensuring that the COVID vaccines are safe, effective and necessary beyond reasonable doubt,” it added.

It said that the replacement of robust natural immunity of children with a shorter and less competent vaccination immunity is cause for grave concern and that the effects on the “maturation of the immune, reproductive and nervous system of infants/young children/teens need to be carefully and scientifically assessed.”

“The rising incidence of adverse events from the current COVID-19 experimental injections, including myocarditis, cannot simply be ignored and merits serious investigation,” it said.

The group called the COVID-19 vaccination programs and policies “divisive, coercive, anti-poor and discriminatory, affecting not only public health but the nation’s social fabric of solidarity and respect in the face of pandemic, and thus needing a thorough review before commencing another round of divisive vaccination rollout.”

The group urged the government to undertake massive education campaigns that promote a more strategic approach and perspective on public and children’s health and maintained that the vaccination must not be made “mandatory and a requirement for enrollment, for face-to-face classes, for sports gathering and other development activities, for access to government aids like 4Ps, etc.” with reports from Antonio L. Colina of MindaNews