By Carmelito Francisco on February 7, 2022

THE LAWYERS of Pastor Apollo C. Quiboloy have branded as suspect the timing of the release of the Federal Bureau of Investigation poster that included the pastor in its most wanted list as a member of the legal team even accused some elements in the American government of using the cases against the pastor in trying to intervene in the Philippine elections as well as destroying President Rodrigo Duterte. 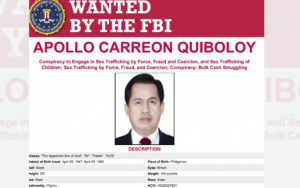 Lawyer Ferdinand Topacio, one of the lawyers of the Kingdom of Jesus Christ the Name Above Every Name, a church that Quiboloy founded, said that, “without getting into the merits of the cases,” the only logical conclusion that can be made out of the cases is that those behind these are using Quiboloy to destroy Mr. Duterte who happens to be his friend.

“Bakit pa po, kung kailan mag-uumpisa ang kampanyahan para sa national elections kung kailan inilabas itong poster na to?” questioned Topacio as he noted that the federal grand jury indictment as well as the supposed release of the warrant of arrest were both released on November 21.

Although he explained that he was not “fomenting any conspiracy theories,” Topacio added: “We all have to be in abject denial to say that the United States has not  been interfering with our elections as far as we can remember.”

He cited the book “Portrait of a Cold Warrior”, particularly the chapter “We Make Presidents,” which he specifically pointed out that the US government, through the Central Intelligence Agency (CIA), has intervened in elections, particularly in Southeast Asian elections.

The author of the book, Joseph Smith, is a retired top CIA official and he narrated the cold war operations of the US government.

Topacio added that when the President was not yet Rodrigo Duterte, there were no accusations against Quiboloy who founded the congregation in September 1985. Duterte and Quiboloy are known to be best of friends.

Branding the release of the poster as not necessary because Quiboloy is not hiding and can even be viewed online during his programs, Topacio said the “trump up charges” started coming out in 2016 when Mr. Duterte started his six-year term as President.

He said the only reason for this is that those behind the charges are using it to “indirectly destroying President Duterte.”

He said those who filed the cases against Quiboloy were the ones who were subjects of investigation by the congregations for different anomalies.

Lawyer Michael Green, Quiboloy’s general counsel who is based in Hawaii, agreed with Topacio that the release of the poster was not necessary.

Green said those accusing Pastor Quiboloy told the grand jury lies which the prosecutor believed and led to the indictment.

He explained that under US legal procedures, an indictment can be had without the person getting indicted presenting his side. “It looks terrible,” said Green of the indictment.

“We used to say in Hawaii, you can indict a coconut; in the mainland (US) we say you can indict a ham sandwich,” he said, in reference to the US legal procedures. “You are not there to oppose what the people are saying,” he said.

Under the Philippine legal procedures, a case can only be filed in court after the prosecutor is able to evaluate the pieces of evidence presented both by the complainant and the respondent.