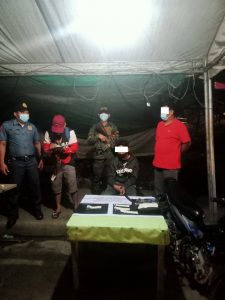 TWO INDIVIDUALS were arrested by the authorities after illegal drugs were allegedly confiscated from them while passing through the joint military-police checkpoints in the city.

He was onboard a blue MC Raider 150 with registration No. 1101-1025677 when apprehended at the Lacson checkpoint in Calinan District on Friday, Jan. 28.

Seized from his possession was a pack of suspected marijuana weighing around ten grams with an estimated street value of P5,000.

Seized from him were two sachets of shabu weighing 1.68 grams with an estimated street value of P26,880. He was on board a public utility van heading for Davao City.