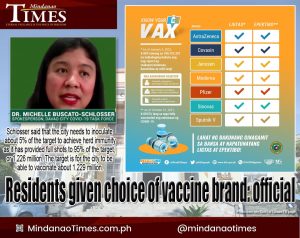 THE CITY government has urged residents to get vaccinated against COVID-19 as they will be given free choice on the brand they want to get inoculated with.

She said the task forced, which Mayor Sara Duterte is heading, wants the people to have the choice of vaccine.

She added that the city government is looking for ways to resolve the problem because its goal is to vaccinate everyone. To protect everybody from the surge of cases.

As of January 21, there were about 1.226 million residents who were fully vaccinated, or about 95% of the target 1.229 million, the number that would allow the city to achieve herd immunity.

This developed as Schlosser confirmed that the two vaccination sites whose personnel were infected with the virus, the the Crocodile Park and the People’s Park, have resumed operations after these were disinfected.

She said that the city government has made sure that the contamination is contained that personnel supervising the vaccination activities are health.