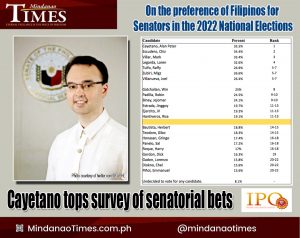 THE University of Mindanao Institute of Popular Opinion conducted an online survey from December 21 to 28, 2021 involving Filipino social media users from different regions of the Philippines relative to their preference for senators of the Republic of the Philippines.

Since the survey was done online as physical contact is still not allowed during the time of conduct of the survey, IPO relied heavily on online and targeted social media users who are targeted and identified via sponsored ads in two social media platforms of Meta (Facebook and Instagram). Respondents were defined to be at least 18 years old, are targeted for contact within the defined geographical radius in each of the major islands of the Philippines, and have valid/active email addresses. Survey was done at a 95% confidence level and 3% margin of error. Results are as follows:

Topping the senatorial candidates is Taguig City representative and former Speaker Alan Peter Cayetano who was the top choice of 35.5% of the respondents. He is followed by Sorsogon’s governor and a former senator, Francis “Chiz” Escudero (34.4%) at second place, former DPWH Secretary Mark Villar (33.4%) at third place, and Antique Representative and House Deputy Speaker, Loren Legarda (32.6%), at fourth place. Occupying the fifth to seventh places are TV personality Raffy Tulfo (26.9%) and Senate re-electionists Juan Miguel “Migz” Zubiri (26.6%), and Joel Villanueva (26.4%). Senate re-electionist Win Gatchalian landed 8th place and is preferred by 25% of the respondents, while former Vice-President Jejomar Binay (24.1%) and celebrity Robin Padilla (24.5%) clinched the 9th to 10th ranks.