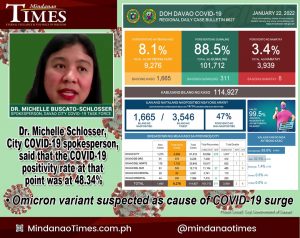 THE region on Saturday breached again the 1,000-mark in new COVID-19 cases, the fourth consecutive day since the start of the year.

Dr. Michelle Schlosser, City COVID-19 spokesperson, said on Friday that the COVID-19 positivity rate at that point was at 48.34%  as the surge has continued.

She said the COVID-19 Task Force of the city has been waiting for the projection as when the surge is expected to slow down. “Kung unsa kadugay ang surge, kung mubaba na so that the public will know but these are only predictions,” she added.

On Thursday, Dr. Rachel Joy Pasion, head of the DOH Regional Epidemiology and Surveillance Unit, theorized that the fast spread of the virus may have been caused by the Omicron variant after the region reported five cases of the variant which were found in the last part of last month.

“If there is a big jump in our cases, we can attribute this to Omicron and because there were local cases detected of Omicron, we can assume that maybe there are really Omicron variant cases,” she said.

However, Pasion said that still, the main variant of concern in the region has been Delta, considered the most potent among the variants.

Even then, Pasion said that taking into account the high transmissibility of the Omicron variant, the possibility that it has dominated the number of cases in the region is possible.

The increase in cases has also affected several offices, among them the DOH regional office which stopped its operations for a week starting Friday so that it can disinfect. The office, however, did not mention how many of its personnel were infected.

This developed as the DOH regional office also agreed with Mayor Sara Duterte that there is a need to balance policies in relation to the impact in the spread of the illness with that of the economy.

Just like the mayor, Pasion also pointed out that the national government has been implementing stringent measures for those international travelers, either returning or visitors, the need to balance the action of local government is necessary.

“We are into three years now in our combat against COVID-19 and we should take into account our resources. We should consider the cost effectiveness of our action basing on the different protocols that we are implementing,” Pasion explained.

The mayor has maintained that the city government will not require those who want to enter the city to present both their vaccination cards and negative COVID-19 test results.

She pointed out that aside from being the burden of incoming visitors, either residents or those who are just visiting, these requirements will just impact on the economic recovery of the city as these do not assure that the virus will not spread considering its incubation period.

Duterte also pointed out that aside from the vaccination rollout, there are already cure for the virus, although this is not yet commercially available. The city government is still waiting for the shipment of medicines against the virus after it placed an order with a foreign company which has sought an approval of its emergency use utilization application from the Philippine government.