THE MILITARY vowed to completely neutralize the Southern Mindanao Regional Committee (SMRC) of the New People’s Army operating in the Davao Region and surrounding areas in the next few months.

“The remaining guerilla fronts of SMRC are weakened GF 2 and 3 and GF 18, and they are about to dismantled. We are just conducting the validation process together with the PNP,” Lt. Gen. Greg Almerol, the Eastern Mindanao Command chief, said in a press conference held at the headquarters of 10th Infantry Division in Mawab, Davao de Oro on Monday.

The 10th Infantry Division is taking on five sub-regional commands (SRCs)–1, 2, 3, 4, and 5, with their corresponding guerilla fronts, under the umbrella of the Southern Mindanao Regional Committee (SMRC).

In SRC 1, there are two guerilla fronts, the north and the south, which were operating in Davao Oriental and parts of Surigao del Sur and Agusan del Sur. But the military said that these were already dissolved, including their committees. The last nail in the coffin was the surrender of alias Bosyong, its secretary-general, to the 67th Infantry Battalion last April 2021.

Under the SRC 2, there is the weakened Guerilla Front 2 operating Davao de Oro, but the military said that it is about to be dismantled. The SRC 3 has GF 57, operating in the boundary of North Cotabato and the southern portion of Bukidnon. 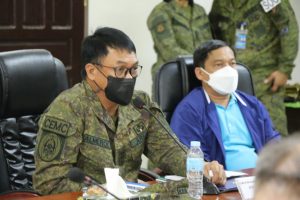 The SRC 4 has the weakened GF 3 operating in La Paz and Loreto, Agusan del Sur, as well as parts of Laak, Davao de Oro.

Moreover, the dismantled SRC 5 operates in Davao del Norte and Davao City, including the southern part of Bukidnon and the boundary of Talaingod.

According to the military, the SRC 5 was considered dismantled after the neutralization of guerilla fronts 54, 55, and 56 from 2016 to 2021.

Under the SRC 5, there are also three Pulang Bagani Commands (PBCs), which were already dismantled. Their remnants created a sub-regional guerilla unit.

The military said that the only one left was the SRC 5 headquarters and SRGU. But there were no capable leaders anymore with the recent surrender of Ka Marikit, the GF 55 secretary, to the 1003rd Infantry Brigade, and Ka Rigor, the secretary of GF 56, and the surrender of Ka Mandy last Jan. 13.

The EastMinCom chief said the remaining guerilla fronts are about to be dismantled in the next few months.

“I think the 10ID is very confident that before the target date of June 2022, we will be able to really dismantle the Southern Mindanao Regional Committee,” he said. “I’m very happy with the leadership of Maj. General Ernesto Torres Jr. as he was able to really accomplish and bring peace and order in the area.”

Torres, the commander of the 10th Infantry Division, also said, “We are optimistic that the units of CPP-NPA-NDF would be defeated in our own timeline toward the end of April 2022.”

“Again it’s not easy but if you look at the trend, there is a big possibility (to accomplish the goal),” Torres said.

The military commander said that when President Rodrigo Duterte took over last 2016, the NPA strength under his area of responsibility was about 900, but now it is down to 150. In terms of firearms back in 2016, there were about six years ago but now it has been reduced to just 220.

He also said that they prevented the recruitment of new members by closing down the schools associated with the communist group. Based on the Army’s estimate, the amount extorted by the NPA was almost P300 million in 2017. Now, it is down to just P1.4 million.

“With all of these indications, plus the help from the local chief executives taking the lead of the counter-insurgency campaign … we are confident that we will achieve our mission for the people here in Eastern Mindanao in defeating the communist insurgency,” he further said.

He said that their counter-insurgency campaign is crucial in protecting the communities, especially since 75% of the NPA fighters were indigenous people.

“With the surrender of Mandy and her group, I think their thrust to recruit more IPs will also fail,” Almerol said.

But Torres said they need to sustain the gains to make sure that the NPA could not bounce back.