Mayor | city opts for a liberal  approach on Level 3 status 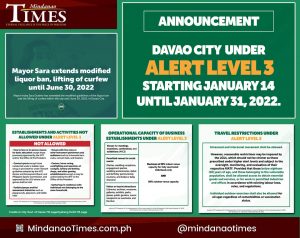 THE CITY will enforce a liberal approach in implementing the protocols under the Alert Level 3 status, which started on Jan. 14 until Jan. 30, 2022.

The mayor said bars may still open so long as they do not serve alcohol in accordance with the modified liquor ban that has been extended until June 30, 2022, as stated in Executive Order (EO) No. 2 series of 2022.

“Ang atoang ginalikayan diri sa alcohol in public is the mass gathering it will create. Kung ang bar mag-open lang sya para sa other services niya, that is not a problem (We are preventing mass gathering due to consumption of alcohol in public. If a bar opens to cater other services, that is not a problem),” the mayor underscored.

She said entertainment in restaurants and venues is also allowed in the liberal implementation of Alert Level 3 status in Davao City. But the wearing of face masks and social distancing should still strictly be observed.

The mayor also said the national government’s guidelines on Alert Level 3 status will be followed by Davao City.