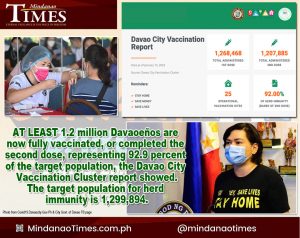 As of January 15, the city government has already administered anti-COVID-19 vaccines to a total of 1,207,885 individuals or 92.92 percent of the target population protection for the second dose.

The city government has also administered the first dose to a total of 1,268,468 individuals or 97.58 percent of the target population protection. A total of 121,050 Davaoeños have also availed of the booster dose.

Mayor Sara Duterte, during the Special Hour Interview on the Davao City Disaster Radio Monday, said that the anti-COVID vaccination is one of the city government’s mechanisms to face the fourth wave of the coronavirus disease.

The mayor was thankful for the hard work of the vaccine cluster and district health offices.

The mayor said that the city also continues to conduct counseling as one of the proactive measures to convince people to be vaccinated.

“The proactive thing to do nga ginabuhat nato sa city government of Davao is that naga counseling ta sa dili gusto magpabakuna. Gina-explain nato sa ilaha ang benefits sa bakuna, ginatubag nato ang ilang mga questions by the experts nga naa dinhi sa atoang health group sa City Health Office. Pagpasabot sa mga tao mao na atong ginabuhat instead of exclusion because samot nga dili magpabakuna ang mga tao kung anaon sila (The proactive thing that we are doing in the City Government of Davao is that we conduct counselling for those who do not want to be vaccinated. We explain to them the benefits of the vaccine. We answer their questions through the experts in our health group in the CHO. We explain it to people instead of doing exclusion because that will only prompt them all the more not to avail vaccines),” she said.

Duterte said that those who opted not to be vaccinated should not be subjected to exclusion in the “no vaccination, no service schemes” because, in the first place, they were given the option not to get vaccinated.

She said that public health experts worldwide require only 70 percent of the population to be vaccinated to achieve population protection.

She added that the remaining number will have to be counseled because they are those who are not willing to go to vaccination sites, mobile vaccination, or even drive-thru vaccination.