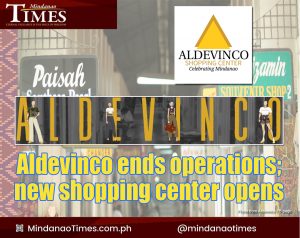 THE management of the Aldevinco Shopping Center, one of the iconic establishments in the city, has shut down its operations after 56 years.

Located at the corners of CM Recto St. and Roxas Avenue, the center, considered the go-to place for tourists and locals looking for souvenir items and other similar goods, closed down at the end of 2021 to pave the way for a new and  upgraded shopping center that is located about a third of a kilometer away.

Aldevinco is considered among the recognizable establishments in the city as it is directly in front of two landmarks, the main school of the Ateneo de Davao University and the now-closed Marco Polo Hotel.

Its locators have started moving to Poblacion Market Central, located at where the Madrazo Fruit Stand used lured buyers and pomelo and other fruits. It is set to start operating this year even as it had its soft launching in October last year when it hosted the Mindanao Art 2021 which featured about 300 artists from the island.

In December, the new establishment also held a Christmas event that showcased the city’s best art pieces, food brands and other items from local artists and entrepreneurs.

Both establishments are owned and by the Alcantara family through its Alsons Development and Investment Corp. (Alsons Dev).

Rosvida A. Dominguez, Alsons Dev executive vice president, said the old shopping center “”has weathered many changes–from being Davao’s very first shopping complex to a local landmark beloved by tourists and Dabawenyos alike. We take pride in Aldevinco, especially the third generation of shop owners who continue to promote Mindanao art and culture through their wares. “

On the transfer of its tenants to Poblacion, Dominguez said the new establishment “is just another chapter in Aldevinco’s history, which to me is an inspiring story of resilience and adaptation.”

Alsons Dev, about five years ago, confirmed that Aldevinco would be closed down to pave the way for a mixed-use development that would include a condominium and a similar structure for retail space as it is leasing for 40 years from the landed Madrazo family the location of Poblacion. The new shopping center has a leasable area of 3,672 square meters.

Like Aldevinco, Poblacion, said the management of the establishments in a statement, is also a celebration of the city’s promising art, retail, and food scene.”

“Aside from your favorite Aldevinco shops, the new commercial development will also feature more retail brands, a food hall, and establishments for essential services,” it added.

Several of the locators of Aldevinco have relocated in Poblacion, while new brands have also found a space in the new establishment. Aldevinco is smaller as it only had a leasable area of 2,990 square meters.

The management of the establishment said more locators are expected to rent space in the new go-to place in the city, including dining areas.

Poblacion, which will have its grand opening in March in time for the celebration of the founding anniversary of the city on March 1, is expected to become a new hangout place for the people of the city as well as visitors looking for souvenir and similar item.

The management has also partnered with a digital company, Ideahub IT Solutions Inc., to develop a virtual mall for people to shop online. “As a preview, a microsite for the pop-up shops is in the works to allow customers to conveniently browse and buy items online and have their orders delivered to their doorstep,” it added.