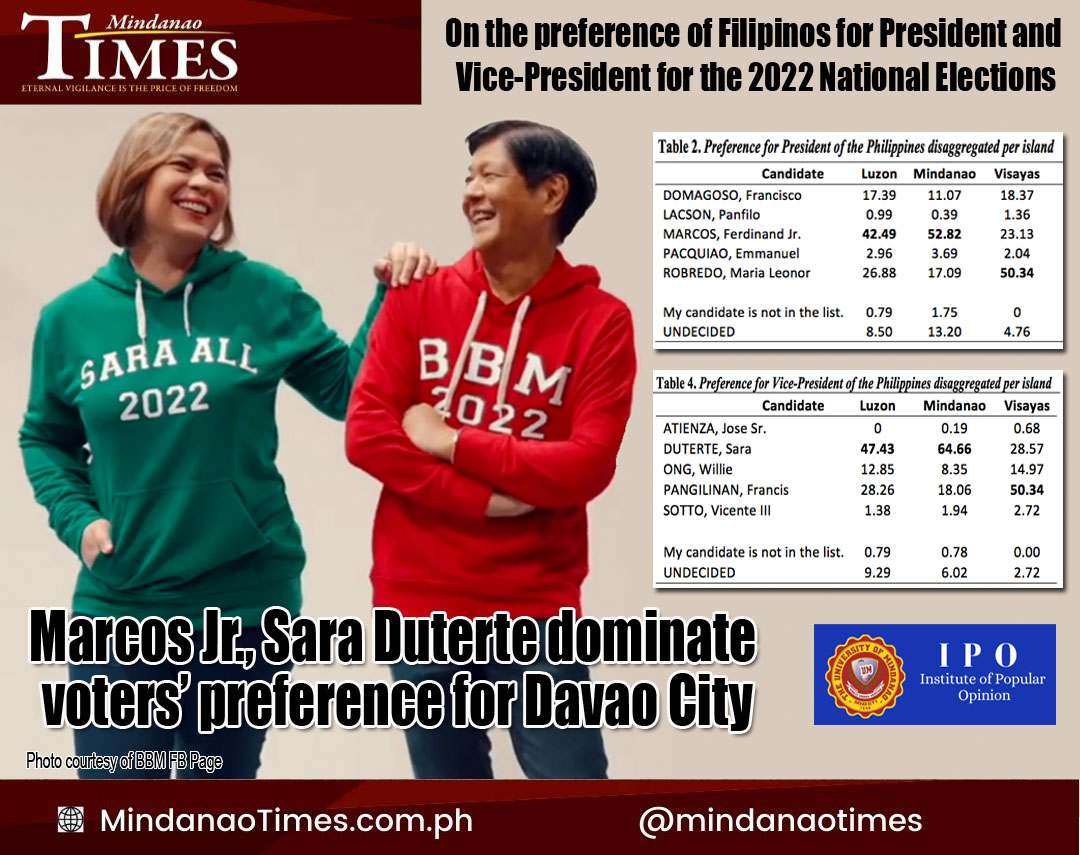 THE University of Mindanao Institute of Popular Opinion conducted an online survey from December 21 to 28, 2021 involving Filipino social media users from different regions of the Philippines relative to their preference for the two highest positions of the country. The survey also intends to evaluate overall and per-island preference for these two top positions and to validate national survey results in the previous weeks.

Topping the Presidential candidates is former Senator Ferdinand Jr. “Bongbong” Marcos who was preferred by 44.61% of the respondents. He is trailed behind by the sitting Vice-President, Atty. Maria Leonor “Leni” Robredo, who is the pick of 25.51% of the respondents. City of Manila Mayor Francisco “Isko Moreno” Domagoso placed third, having 14.73% preference rating, while Senator Emmanuel “Manny” Pacquiao has a 3.17% preference rating. In sum, the result roughly translates that nearly 5 of 10 Filipinos would likely pick Marcos as the next President of the country. On the other hand, 10% of the voters are still undecided as to who will be their presidential preference at the time of the survey.

The survey also included further analysis of the possible bailiwicks which would contribute much to the overall preference of the Presidential candidates. When preference was categorized as to major islands, Marcos Jr. is the top Presidential choice among voters from Luzon (42.29%) followed by Robredo (26.88%) and Domagoso (17.39%). The three candidates have strong bailiwicks in the Ilocandia, Bicol, and the National Capital Region/Manila area, respectively.

As for Mindanao voters, more than half (52.82%) prefers Marcos compared with other Presidential candidates, with Robredo (17.09%) and Domagoso (11.07%) occupying the second and third most preferable President. Senator Pacquiao, who hails from General Santos City, has an overall 3.69% preference rating.