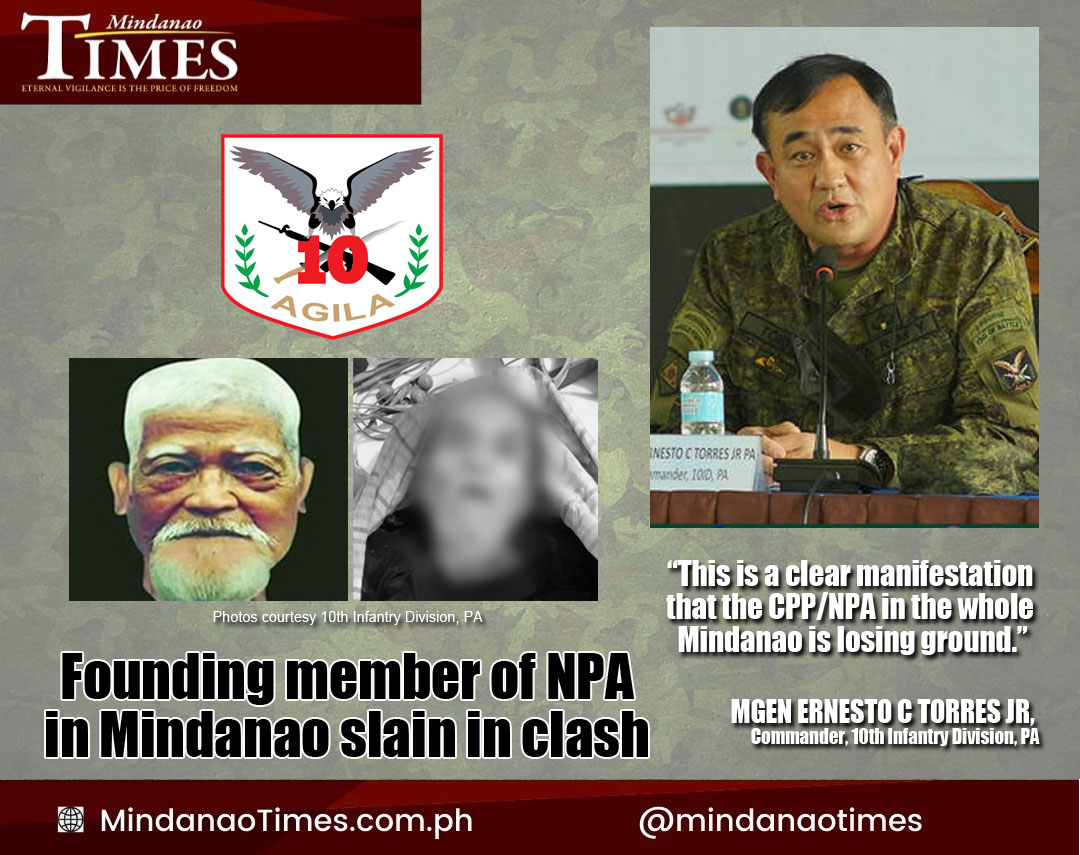 Founding member of NPA in Mindanao slain in clash

A HIGH-RANKING communist leader  with over P5 million bounty on his head was killed in an encounter in Barangay Libudon, Mabini, Davao de Oro on Wednesday evening, Jan. 5.

Villanueva had a bounty of P5.6 million.

Capt. Mark Anthony Tito, the 10th Infantry Division Public Affairs chief, said that Villanueva was the longest-serving secretary of Southern Mindanao Regional Committee (SMRC), currently the secretary of Komisyong Mindanao (KOMMID), commanding officer of the NPA’s National Operations Command (NOC), and member of the Politburo of the Central Committee of the Communist Party of the Philippines (CPP) was killed in an encounter against the troops under 1001st Infantry Brigade.

Tito said a concerned citizen reported the presence of the communist rebels disrupting the peace in said area.

Immediately, the 1001st Brigade, under the leadership of Brig. Gen. Jesus P. Durante III, deployed its troops to verify the report, which resulted in the clash.

The report said that he was hit in several parts of his body.

For now, the troops are still conducting pursuit operations to the fleeing communist rebels.

According to the military, Villanueva was one of the founding members of the NPA in Mindanao during the 1970s, together with Edgar Jopson.

During his student years in Ateneo de Manila, he was an activist under the Kabataang Makabayan (KM) and went underground when Martial Law was declared.

“The 51 years reign of terror of Menandro Villanueva is finally over. His victims were finally given justice. Alias Bok had several warrants of arrests to include multiple murder, double frustrated murder, arson, robbery with intimidation, rebellion, among others,” said Durante.

He further renewed his call to the fleeing NPAs: “Surrender now while you still can. Don’t wait to suffer the same fate as Menandro Villanueva. The government is always willing to accept you if you decide to return to the folds of the law,” he added.

“This is a clear manifestation that the CPP/NPA in the whole Mindanao is losing ground. Mindanao’s most wanted terrorist is now finally neutralized by your Agila Troopers. They have nowhere to hide because the masses are already fed up with the abuses and extortion they perpetrated for more than five decades. The death of Menandro Villanueva signals that the end of the Communist insurgency in Mindanao is already at hand,” MGen Torres added.

It can be recalled that troops of the 1001st Brigade also figured in an armed engagement with the same group last Dec. 24, 2021 that resulted in the death of Anna Sandra Reyes, alias Kaye, the secretary of Regional White Area Committee (RWAC), SMRC.

For now, the 10ID is still pursuing Eric Casilao alias Wally/Elian, and his party wife May Casilao alias Gab, both high ranking members of SMRC.

Casilao, the military added, is the secretary of Southern Mindanao Regional Committee and a P5.4 million bounty has been offered for his head.

Durante said his unit suspected that the two are hiding somewhere in Mabini, Davao de Oro.

“We are thinking that we have cornered them in the area,” Durante said, as he urged the people to report if they have valuable pieces of information that would result in their arrest.

In a press conference on Sunday at the 1001st Infantry Brigade headquarters in Maco, Davao de Oro, Torres Jr. said it is crucial to neutralize Villanueva because of his role in the movement.

“His pictures were distributed and posters posted around because we still know that he is still there in the operational area,” Torres said.