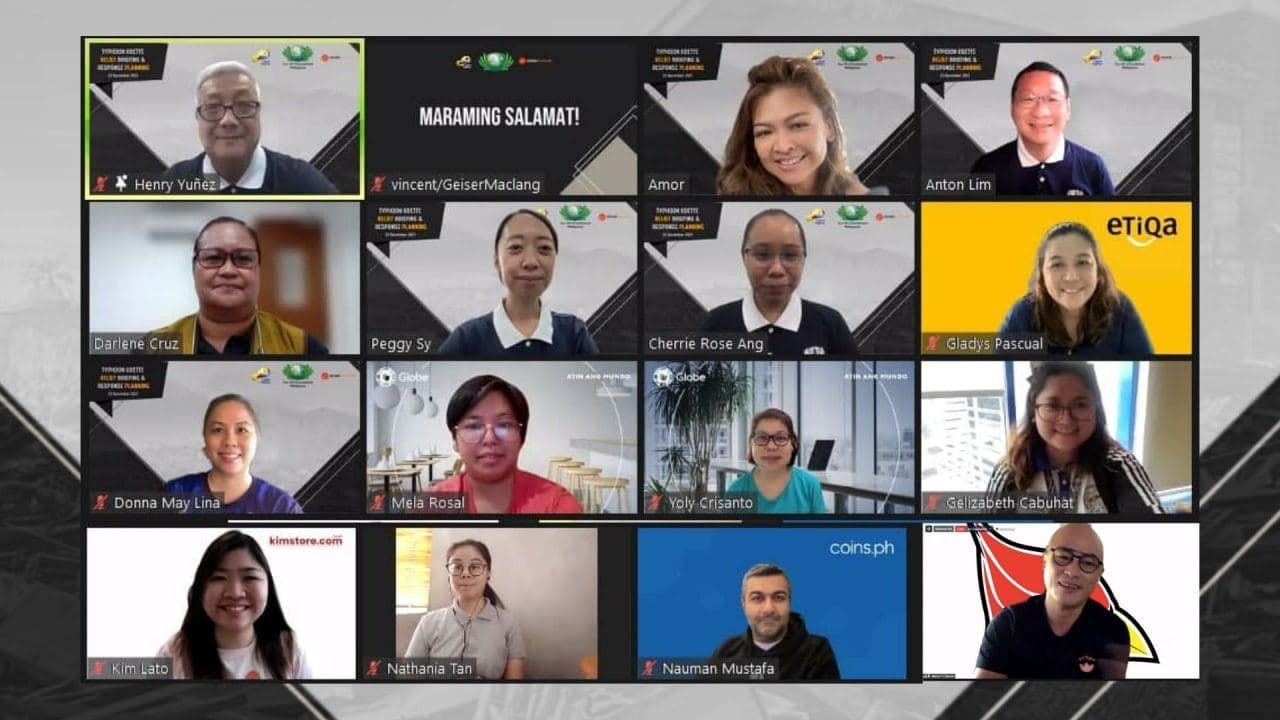 A week shy from Christmas, the devastation wrought by super typhoon Odette has leveled large parts of the central and southern Philippines, placing six regions under a state of calamity: Mimaropa, Western Visayas, Central Visayas, Eastern Visayas, Northern Mindanao and Caraga. However, the lack of communications within the affected regions and the unpassable roads between the various towns have made the urgent distribution of assistance an enormous challenge. This prompted a call from and for business and NGO leaders to collaborate to get the communities back on their feet, as well as to form strategic responses for future calamities.

Bro. Henry Yunez, Country CEO of the humanitarian organization Buddhist Compassion Tzu Chi Foundation Philippines, welcomed the “chance to connect to these groups.” Referring to the faith on which their group was founded, he added that they welcome volunteers and resources from all sectors because “there is no religion involved in what we are doing.”

Since the clearing of the weather which has allowed volunteers and rescue missions to enter the affected regions, Tzu Chi has visited nine municipalities in Bohol and 15 in Southern Leyte.  They have sent gallons of water and medicines to these provinces, while looking for more generators that can help in the pumping of water.  There are plans to distribute rice to around 20,000 families soon after December 26.

When the Philippines was struck by 2013’s Yolanda, one the strongest typhoons in history, Tzu Chi’s response to the relief operations was considered to be one of the most impactful by civil society and government.

Beyond the collection and transportation of relief goods for the Odette victims, help is also needed for “heavy equipment and the construction side of things,” said Amor Maclang, Digital Pilipinas Convenor. A more “participative and transparent” collaboration of partners can tap fast-rising technology like fintech, e-commerce, and logistics to “move money faster” to the recipients who need them the most.  Digital Pilipinas, a movement which addresses business and social challenges through technological adoption, has helped the Tzu Chi Foundation previously “even before Odette, to tech up their organization,” said Maclang. “Most importantly, we can leverage technology to show transparency of where the money is going.”

Cherrie Rose Ang, Admin Senior Officer of Tzu Chi’s Admin and Volunteer Affairs Department, acknowledged that the “meeting is not just for awareness, but for support, cooperation, and unity.” Days after Odette has made nine landfalls across Visayas and Mindanao, Filipinos find themselves staying in temporary shelters or evacuation centers. Ang described the situation their volunteers reported:  “Children are going out to the streets to beg for help. People are desperate to salvage whatever items they can get from their ruined houses.”

Various businesses represented in the webinar are already helping out in the relief efforts. Gladys Pascual, Etiqa Head of Strategy and Transformation, said that their program EtiqaCares is supporting the rehabilitation programs.  Kim Lato, Founder of Kimstore, is opening their platform to collaborate with the Tzu Chi Foundation to launch a fundraiser. Meanwhile, Coins.PH CEO Nauman Mustafa shared that “instead of buying Christmas gifts for our partners, we will be donating instead.”

Even those struck by Typhoon Odette themselves are organizing relief operations. Roy Miclat, President of 1 Cooperative Insurance System of the Philippines, said that his team is serving “in the remote areas, even though hundreds of our members have been affected by Odette.”

Meanwhile, in response to concerns about restoring communications and internet connectivity, Yoly Crisanto, Globe SVP and Chief Sustainability Officer, said that the telecom giant is “doing what we can to make sure all the provinces struck by Odette become online and connected again.” She also pointed out that the increasing threats against climate change will only spur more and stronger typhoons especially for vulnerable countries like the Philippines.  She said, “The challenge of our time is what are we going to do to become better the next time we are faced with the same situation.”

Miclat agreed that forward-looking activities “should not focus on one-time activities, like donation drives.”

One solution is the collaboration between Coins.ph’s Mustafa and Donna May Lina, Director and Executive Board of the OneLGC Lina Group of Companies. Both companies will be tokenizing the efforts for tree planting to better encourage Filipinos to take part in the rehabilitation of the environment. With the Lina organization’s expertise in disaster preparedness, they are looking to onboard more people who can become better equipped when the next disaster strikes.

Marco Santos, representing the Mapua University and the Yuchengco group, said that the country can prepare the future architects, engineers, and other professionals with the knowledge to create resilient structures against calamities.  He described it as “producing people who are ready for the job. We produce good engineers. Our first patent is called Project Usher and it enables us to monitor buildings during an earthquake.”

Technology will also be vital not only for the operations in response to Typhoon Odette but for the future. “We can align all our groups to make technology and our systems relevant,” Georgia Martelino, Philanthropist Lead of Microsoft Philippines, said. “Let us pool our resources and label it as a Tzu Chi platform so people can access it for free. We can start with digital literacy.”

Leveraging on its worldwide network of volunteers and employees, Tzu Chi Foundation Philippines is aiding in the rehabilitation, recovery, economic, and educational resumption of the areas affected by Typhoon Odette. They involve the communities themselves in various operations, which is also a way to provide them temporary sources of income.

“With love in our hearts, there is nothing we cannot overcome. We can come together and build again,” Anton Lim, OIC of  Tzu Chi Zamboanga Liaison Office, said.

Maclang affirmed that the collaboration will continue because it not just “about Odette but about humanity.”  There are plans for Tzu Chi, Digital Pilipinas, and the other companies to hold more meetings with more action plans as the situation develops.