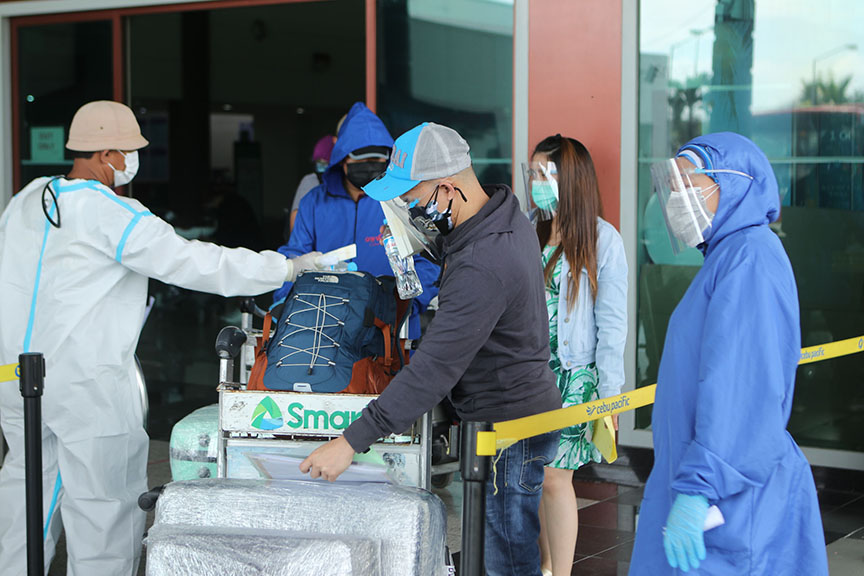 Many overseas Filipinos are flying home for family reunions this December and in January 2022 but arrival caps on arriving passengers might lead to stranded OFWs, and overwhelm Philippine embassies and diplomatic posts abroad, especially in OFW-heavy countries such as those in the Middle East.

“Our frontline teams in several countries are receiving a constant stream of requests from OFWs and other Filipinos, begging for a chance to come home and see their families or attend to urgent matters, all the way up to January,” said Dexter C. Lee, PAL SVP/Chief Strategy and Planning Officer.

“We have the planes and the crew ready to fly them, and we appeal for the chance to do so.  We will do all we can to help secure hotel rooms in coordination with OWWA and the other agencies,” said Lee.

The flag carrier estimates that about 2,500 passengers, mostly OFWs, are affected, and the number could rise if PAL is required to cancel or adjust more flights.

“The pandemic kept families away from each other, but as rates of vaccination increase in the country and lower cases are being reported, it opens up opportunities for loved ones to reunite. We should at least give our kababayans this chance,” said Joey Concepcion, Presidential Adviser for Entrepreneurship and Go Negosyo founder.

The government had earlier imposed a quota of only 4,000 arriving passengers per day at the NAIA. The move was in response to fears of the spread of the Omicron variant and has led to forced cancellations of many inbound flights, and consequently prevented OFWs abroad from heading home this Christmas.

Lee clarified that PAL is not asking to lift the arrival caps, but instead some cooperation with the airlines to maximize the cap from where it is today. He gave as an example the exclusion of non-OFWs from the cap since they book their own hotel rooms anyway.

The suggestion is in response to reports of a bottleneck resulting in a shortage of hotel rooms in the NCR meant specifically for returning OFWs. The shortage resulted in flight cancellations and affected OFWs who had already booked their flights.

Airlines are reported to be facing heavy fines should they exceed their individual quotas.

This despite earlier efforts by health authorities, airlines, local hotels and the OWWA to anticipate the influx of inbound OFWs, including planned increases in international flights from Middle East and Asian countries and calibrated adjustments to quarantine requirements.

“We have established solid quarantine and testing protocols for arriving passengers that effectively screen out any community transmission of Omicron and other COVID variants from arriving travelers,” Concepcion said in a separate interview.

“We have the resources in place to guard against Omicron without afflicting our OFWs and other returning Filipinos, so we should have the confidence and foresight to increase our arrival quotas to enable our countrymen to fly home,” he added.

PAL’s One-Stop-Shop facility at the NAIA shows a testing positivity rate of only 0.54% as of December.  The RT-PCR testing requirements before travel serve to identify positive cases, with these being isolated and resolved before release from quarantine.

Concepcion said that airlines can work with OWWA in sourcing more hotel rooms, saying that airlines like PAL can ensure that returning overseas Filipinos already have pre-arranged hotel reservations in Metro Manila, and they are offering to assist OWWA in finding hotel rooms for OFWs. The OWWA is in charge of finding OFW quarantine accommodations.

Moreover, other airlines would have their own arrangements with hotels that OWWA could tap. It is estimated that the OWWA will need to block 25,000 rooms during critical weeks for OFWs.

“Government can work with the airlines to increase the number of quarantine rooms so we can accommodate as many OFWs as possible,” said Concepcion.

“To airlines and hotels, we must have a partnership approach, not a punitive approach,” said Concepcion. He also cited local efforts to increase vaccinations and speed up booster shots are helping drive down fresh cases of COVID in the country. “We have built a wall of protection around the NAIA by vaccinating close to a hundred percent in the NCR,” he said.  “We must trust that we have done what we can to keep the spread of the virus in check, and let our OFWs come home.”