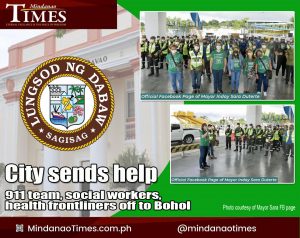 THE CITY government sent 911 responders, as well as medical personnel and social workers, to help in the relief and rescue operations for people affected by Typhoon Odette.

The delegation is headed to the Municipality of Ubay, Bohol Province.

According to the report, at least 75 people were reported killed in some areas in Visayas and Mindanao after the strongest typhoon Odette hit the country this year.

After leaving a trail of destruction, the typhoon Odette left the country at 12:40 p.m. on Saturday, Dec. 18.

By 7:47 pm of Saturday, at least 18 national roads have reopened while six roads remained impassable to all types of vehicles in four regions, the Department of Public Works and Highways (DPWH) reported on Saturday.

The estimated partial cost of damage to national roads, bridges, and flood-control structures was placed at PHP213.9 million.

In a statement, the DPWH said as of noontime Saturday, two roads in Region 7, one in Region 8, two in Region 10, and one in Region 13 are still closed due to fallen trees, electric poles, and debris, damaged spillways, landslides, and road slips.