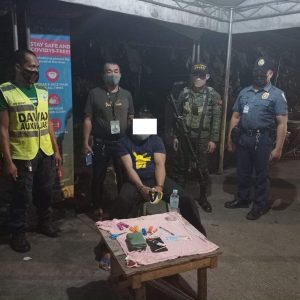 LAW ENFORCERS arrested a man on a taxicab when he allegedly yielded two sachets of shabu at the checkpoint in Sirawan Monday night.

Based on the report, Krishan Andru M. Mamaril was collared when he and the vehicle he was riding were inspected and yielded the prohibited drugs. Mamaril, 29, was from Malalag, Davao del Sur.

The report said law enforcers supervising the decided to thoroughly inspect the vehicle and the people inside after they noticed the “suspicious movements” of Mamaril.